35+ Amazing Facts About the Planet Mars

Mars is one of the most intriguing planets in the solar system. It’s filled with mysteries, including huge canyons approximately 3000 miles across and 6,000 miles deep, volcanoes about 75,000 feet tall, and other fascinating sceneries in our solar system. Water once rule this planet, then disappeared into thin air. With that in mind, let’s look at some 35+ amazing facts about planet Mars. 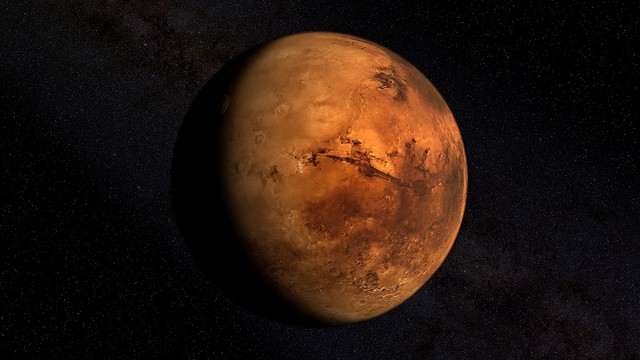 Fact 1. Mars is the second smallest planet after Mercury, and is famously known as the “Red Planet” due to the widespread iron oxide on its surface that gives it the characteristic red color.

Fact 3. The fact about who exactly discovered Mars is still shrouded in mystery. What we do know is that it was named after the Roman god of war, as its reddish appearance reminded people of blood. However, in 1659, Christian Huygens, a renowned Dutch mathematician, and scientist, discovered a weird feature on the surface of Mars. It was later referred to as Syrtis Major, an ancient volcanic area on Mars.

Fact 4. A year on Mars, commonly known as Martian Year, is equal to 687 Earth days. On the other hand, a day on Mars lasts only 40 minutes more than a day on Planet Earth.

Fact 8. Mars was once dominated by oceans, until they suddenly disappeared. However, all the waters could make only 1.5% of all water present on Earth.

Fact 9. In the years 2014, the Curiosity Rover, a car-sized robotic rover deployed by NASA to explore the Gale Crater, discovered burps of methane, which the scientist speculate could mean there was existence of life on Mars.

Fact 10. Although Mars is viewed as a potential second Earth, humans would not be able to breathe in its atmosphere, which consists of 96% carbon dioxide and less than 0.2% oxygen.

Fact 11. Just like Earth, Astronauts found ice caps at the poles of the Red Planet. The northern cap is about 2 miles (3.2 kilometers) deep, and is thought to cover an area similar to Texas.

Fact 13. It’s pretty hard to get to the Red Planet. Approximately a third of all the missions to Mars have failed.

Fact 14. Dust storms experienced on Mars are some of the largest and fiercest in the solar system. A single dust storm is capable of covering the entire planet and could last for months.

Fact 15. Mars is relatively smaller than Earth, which means it would take more than 6 Mars to fit into Earth.

Fact 16. On the red planet, the sun’s appearance has the same size as it does on Planet Earth.

Fact 18. Different cultures called Mars by different names. The ancients Greeks named the Red Planet ‘’Ares,” after their god of war. The Chinese called it ‘’the fire star”, the Romans called it ‘’Mars,” while the Egyptians named it ‘’the red one” due to its characteristic red color.

Fact 19. Traces of liquid water were discovered on Mars. Over the past centuries, Mars has been known to contain water in the form of ice. Satellite images revealed dark stains or stripes as first signs of trickling water.

Fact 20. Scientist project that Mars will have a ring someday. They say that in the coming 20 to 40 million years, the Red Planet’s biggest moon, Phobos, will be shredded apart by strong gravitational forces, resulting in the creation of a ring that is projected to last 100 million years.

Fact 21. The path orbited by Mars is elliptical, oval-shaped around the sun. It’s also longer than other planets in the solar system.

Fact 22. Galileo Galilei was the first human to discover Mars through a telescope. Within a century, scientists were able to pinpoint its ice caps.

Fact 23. Mars experiences all the four seasons occurring on earth because its axis is tilted away from the sun.

Fact 24. The month of March is named after the Red Planet, Mars.

Fact 27. Mars lacks an Ozone layer like Earth as it has a potent dose of radiation when the sun rises.

Fact 29. During the exploration of Mars, scientists discovered a wide variety of rocks. They named the rocks: Shark, Stimpy, Yogi, Moe, Cabbage Patch, and Bamacle. They settled on these names because they were easy to remember.

Fact 30. The first spacecraft sent to explore the Red Planet was the Soviet Union’s Mars 1, in the year 1962. Mission controllers lost contact with the spacecraft on route to Mars.

Fact 31. The first American spacecraft to reach Mars was the Mariner 4. It returned close-up images of Mars back to Earth. It sent blurry images of bare ground and craters, which led few scientists to conclude that Mars has similar characteristics to the moon.

Fact 32. Mars has 62% lower gravity than Earth. That means humans can hope around Mars a lot easier than Earth. If a human weighs 100 pounds on earth, they would weigh 38 pounds on mass. Also, if you jump on the Red Planet, you would achieve 3 times the height you can achieve on Earth.

Fact 33. Mars features the deepest canyons of all the planets of the solar system. The deepest is the Valles Marineris, which has a length of 4,000 kilometers (2.485 miles) and some regions go a deep as 7 kilometers (4.3 miles). This has led scientists to believe that Mars used to have rivers.

Fact 34. Mars consists of two moons: Phobos and Deimos. Both feature irregular shape. Phobos is projected to crash into the Red Planet due to the fact that it moves closer to its atmosphere. However, this is anticipated to occur in the next 10 to 50 million years.

Fact 35. As of this writing, there are 7 robots wandering the surface of Mars.

Fact 36. Mars lacks magnetic field like Earth, which means it doesn’t have a molten metal core.