Plastic pollution poses even greater impacts on the environment because of its widespread usage and its durability component. The global plastic consumption throughout the globe was approximated at 260 million tons in 2008, and it was predicted to be more than 300 tons in 2015 – according to the Global Industry Analysts. These plastics wind up negatively affecting wildlife habitat, wildlife, and humans by affecting lands, oceans, and waterways.

Wildlife and marine creatures at times confuse plastics wastes for food, affecting them when ingested or may be exposed to the toxic chemicals present in the plastics that can cause biological upsets. Human biological functions are also affected by the plastic’s toxic chemicals. Besides, plastic wastes lead to other forms of environmental pollution. 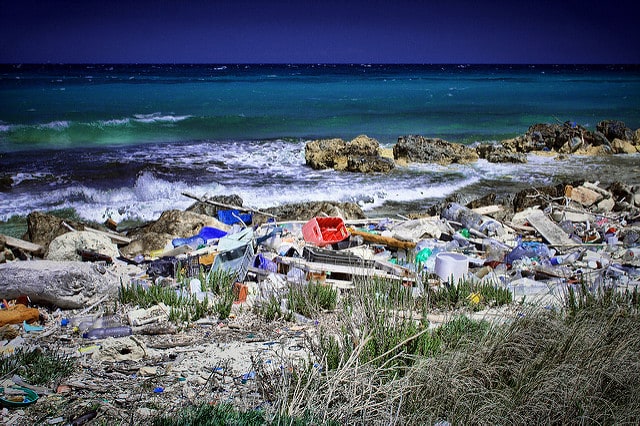 Here are the impacts of plastic pollution.

Plastic wastes have been mistaken for food by numerous animals, mainly marine wildlife. Large quantities of plastics have been found in the stomachs of many dead animals. When the plastics are ingested, they upset or fill up the digestive systems of the animals thus contributing to their death due to blockage or starvation.

Marine animals can also be trapped in plastic waste where they are exposed to predators or starve to death. The plastics may also contain toxic chemicals which can harm the animal’s vital organs or biological functions. Cumulatively, plastic wastes have profoundly affected animals in aquatic, marine, and terrestrial ecosystems.

Plastics are made up of a variety of toxic chemicals. As such, its uses and exposure are associated with a number of human health concerns. Chemicals leached from the plastics contain compounds like polybrominated diphenyl ether (PBDE), bisphenol A (BPA), and phthalates. These chemicals have been established to upset the endocrine system and thyroid hormones and can be very destructive to women of reproductive age and young children.

Plastics wastes have resulted in the destruction and decline in quality of the earth’s land surfaces in term of use, landscape and ability to support life forms. Mainly, it’s because plastics leach hazardous chemicals on land, forms breeding grounds for diseases, and litters available space thereby reducing the productive land areas. The bulk of plastics also end up in the landfills and since they take years to breakdown they heap up causing significant health implications to plants, people, and animals within the surrounding.

Often, plastics are burned in the open air. This leads to air pollution because poisonous chemicals are released into the atmosphere during combustion. Plus, when animals or humans inhale the polluted air it can affect their general well-being and cause respiratory disorders.

Whenever plastics are dumped in landfills, the hazardous chemicals present in them seep underground when it rains. The leaching chemicals and toxic elements infiltrate into the aquifers and water table, indirectly affecting groundwater quality. Eventually, it thwarts the efforts of water conservation around the world since it endangers the sustainability of the waters.

Many lakes and oceans have reported alarming cases of plastic debris floating on water surfaces, affecting a great number of aquatic creatures. It leads to dreadful consequences to marine creatures that swallow the toxic chemicals. Besides, the hazardous plastic chemicals contaminate water and reduce its quality. Estimations reveal the existence of billions of tons of plastics in swirling convergences constituting about 40% of the globe’s oceanic surfaces.

In 2014, UN report estimated the annual impact of plastic pollution on oceans at US$ 13 billion. Other numerous water surfaces across the globe have thousands of tons of floating plastic debris and are experiencing similar economic impacts.

Planktons, mollusks, worms, fishes, insects, and amphibians are all affected by plastic pollution. These organisms at one point or another take-up or swallow the toxic chemicals from the plastics. When the smaller animals are intoxicated by ingesting plastic, they are passed on to the larger animals disrupting the interrelated connections within the food chain.

Furthermore, the process climbs even higher in the food chain, and humans eat the fish or seafood that has been contaminated by the plastic toxic chemicals. Studies determine that the chemicals affect the biological and reproduction process resulting in reduced numbers of offspring thus disrupting the food chains.

Scattered plastics at the beaches or on dumpsites/towers/traffic lights/poles within cities usually portray a very bad picture of the respective regions and depict environmental insensitivity. Winds may also carry the plastics to other areas, increasing plastic littering. As a result, tourism to such areas is affected leading to loss of tourism revenue.

Furthermore, millions of money are spent annually to clean regions littered or affected by plastic pollution. Hundreds of endangered marine creatures such as the sea turtles are lost on a yearly basis for having consumed pieces of plastic. Humans are as well extensively affected by the health implications of plastic pollution whereas plants continue to decline due to plastic chemical intoxication.