What is a Tornado?

Tornadoes are associated with violent and destructive windstorms occurring over land characterized by a funnel-shaped cloud extending towards the ground. In other words, a tornado is a funnel-shaped violent windstorm that whirls upwards rapidly with a tip touching the ground.

If the tip doesn’t touch the ground, it is termed as a funnel. Tornadoes contain a mixture of powerfully rotating thunderstorms and clouds which are very destructive as it can flatten anything in its path. Strong tornadoes have flattened homes, injured and killed people, and have lifted cars and smashed them into pieces. 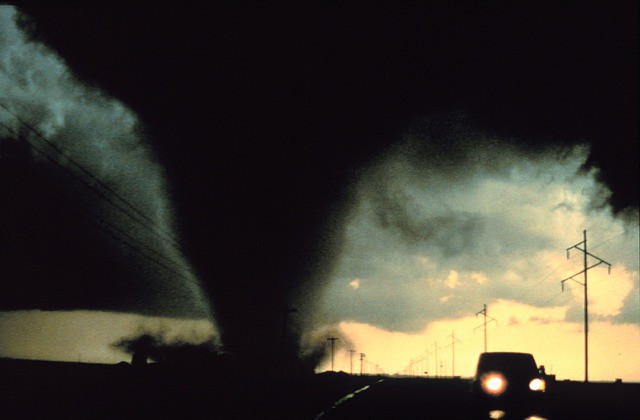 According to Weatherwizkids, “A tornado is a violent rotating column of air extending from a thunderstorm to the ground. The most violent tornadoes are capable of tremendous destruction with wind speeds of up to 300 mph. They can destroy large buildings, uproot trees and hurl vehicles hundreds of yards. They can also drive straw into trees. Damage paths can be in excess of one mile wide to 50 miles long.”

One of the worse tornadoes was in March 1925 in Missouri – USA that killed 823 people and left more than 3000 people injured. Tornadoes can reach speeds of up to 150 miles per hour, can grow as high as 75 feet, and usually covers an area of approximately 300 to 400 yards.

Tornadoes at times form very fast and unexpected, leaving very little time for warning or cautionary action. The occurrence of tornadoes is common in Tornado Alley in the USA, but they can typically occur anywhere.

Tornadoes form on land and are natural phenomena caused by violent thunderstorms whenever there is enough wind shear and instability in the lower atmosphere.

The combination of instability and wind shear thus brings about the formation of the tornado. The existence of the instability and the wind shear is only at cold front and low-pressure system. The wind shear and unstable air results in updrafts and downdrafts in the violent thunderstorm that causes tilting of the winds, forming an upright tornado vortex.

This is influenced by the changes in wind speed and direction in the upper areas of the atmosphere that causes an upright spinning effect in the lower region. The air flowing at the low-pressure center converges inward in the direction of the thunderstorm, making it spin even faster with a diameter ranging from 2 to 6 miles of rotating air.

At this point, the rotating effect forms a center core of violent ascending currents of air. This creates a rotating wall cloud origination from the eye of the storm from the base of the cloud. The tornado is now fully formed. The center is the most dangerous part, which usually flattens everything in its path.

Other ingredients that can influence the occurrence of tornadoes is the presence of dry air in the middle of the atmosphere which can quickly be cooled by thunderstorm, intensifying updrafts and downdrafts that aid the formation of tornadoes.

Since wind shear and instability are the main elements for tornado formation, lack of either element leads to the formation of weak tornadoes. If wind shear conditions are strong but the atmosphere is not unusually unstable, only weak tornadoes form.

The vice versa also produce similar results. In California for instance, weak tornadoes form in the winter when wind shear conditions are strong but the atmosphere is calm. In Florida, the same happens when the airmass is very unstable, but there is very little wind shear.

Tornadoes are very dangerous and are categorized as natural disasters whenever they strike hard. As much as it can be a wonderful natural phenomenon to view, it’s imperative to take shelter if tornado comes. In tornado prone areas most people have built storm shelters or cellars underneath their homes so that they could take cover whenever a tornado is imminent.