What is a Landslide?

Landslides are among the many natural disasters causing massive destructions and loss of lives across the globe. According to a survey study by the International Landslide Centre at Durham University, UK, 2,620 fatal landslides occurred between 2004 and 2010. These landslides resulted in the death of over 32,322 people. The figure does not include landslides caused by earthquakes. This research result is astonishing considering the number of people killed by landslides. It is, thus, paramount to know the causes and warning signs of a potential landslide to minimize losses.

A landslide, sometimes known as landslip, slope failure or slump, is an uncontrollable downhill flow of rock, earth, debris or the combination of the three. Landslides stem from the failure of materials making up the hill slopes and are beefed up by the force of gravity. When the ground becomes saturated, it can become unstable, losing its equilibrium in the long run. That’s when a landslide breaks loose. When people are living down these hills or mountains, it’s usually just a matter of time before disaster happens. 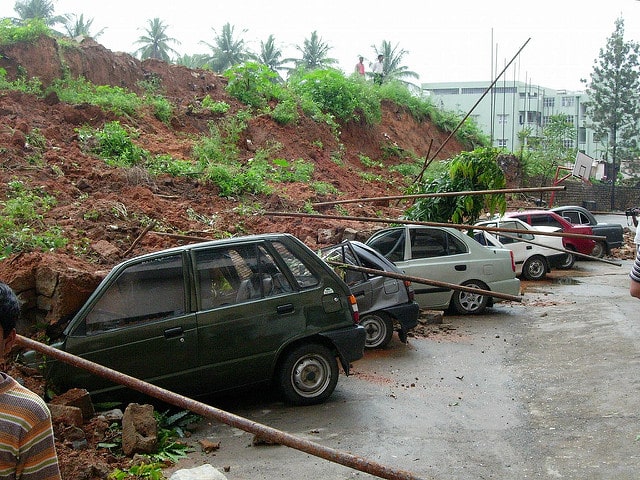 While landslides are considered naturally occurring disasters, human-induced changes in the environment have recently caused their upsurge. Although the causes of landslides are wide ranging, they have 2 aspects in common; they are driven by forces of gravity and result from failure of soil and rock materials that constitute the hill slope:

Long-term climatic changes can significantly impact soil stability. A general reduction in precipitation leads to lowering of water table and reduction in overall weight of soil mass, reduced solution of materials and less powerful freeze-thaw activity. A significant upsurge in precipitation or ground saturation would dramatically increase the level of ground water. When sloped areas are completely saturated with water, landslides can occur. If there is absence of mechanical root support, the soils start to run off.

Seismic activities have, for a long time, contributed to landslides across the globe. Any moment tectonic plates move, the soil covering them also moves along. When earthquakes strike areas with steep slopes, on numerous occasion, the soil slips leading to landslides. In addition, ashen debris flows instigated by earthquakes could also cause mass soil movement.

Weathering is the natural procedure of rock deterioration that leads to weak, landslide-susceptive materials. Weathering is brought about by the chemical action of water, air, plants and bacteria. When the rocks are weak enough, they slip away causing landslides.

Volcanic eruptions can trigger landslides. If an eruption occurs in a wet condition, the soil will start to move downhill instigating a landslide. Stratovolcano is a typical example of volcano responsible for most landslides across the globe.

Forest fires instigate soil erosion and bring about floods, which might lead to landslides

Mining activities that utilize blasting techniques contribute mightily to landslides. Vibrations emanating from the blasts can weaken soils in other areas susceptible to landslides. The weakening of soil means a landslide can occur anytime.

Clear cutting is a technique of timber harvesting that eliminates all old trees from the area. This technique is dangerous since it decimates the existing mechanical root structure of the area.

Landslides have been verified to result in destruction of property. If the landslide is significant, it could drain the economy of the region or country. After a landslide, the area affected normally undergoes rehabilitation. This rehabilitation involves massive capital outlay. For example, the 1983 landslide at Utah in the United States resulted in rehabilitation cost of about $500 million. The annual loss as a result of landslides in U.S. stands at an estimated $1.5 billion.

The force flow of mud, debris, and rocks as a result of a landslide can cause serious damage to property. Infrastructure such as roads, railways, leisure destinations, buildings and communication systems can be decimated by a single landslide.

Communities living at the foot of hills and mountains are at a greater risk of death by landslides. A substantial landslide carries along huge rocks, heavy debris and heavy soil with it. This kind of landslide has the capacity to kills lots of people on impact. For instance, Landslides in the UK that happened a few years ago caused rotation of debris that destroyed a school and killed over 144 people including 116 school children aged between 7 and 10 years. In a separate event, NBC News reported a death toll of 21 people in the March 22, 2014, landslide in Oso, Washington.

The erosion left behind by landslides leaves behind rugged landscapes that are unsightly. The pile of soil, rock and debris downhill can cover land utilized by the community for agricultural or social purposes.

The soil, debris, and rock sliding downhill can find way into rivers and block their natural flow. Many river habitats like fish can die due to interference of natural flow of water. Communities depending on the river water for household activities and irrigation will suffer if flow of water is blocked.

Falls are sudden movements of loads of soil, debris, and rock that break away from slopes and cliffs. Falls landslides occur as a result of mechanical weathering, earthquakes, and force of gravity.

This is a kind of mass movement whereby the sliding material breakaways from underlying stable material. The kinds of slides experienced during this type of landslide include rotational and transitional. Rotational slides are sometimes known as slumps since they move with rotation.

Transitional slides consist of a planer or 2 dimensional surface of rupture. They involve landslide mass movement following a roughly planar surface with reduced rotation or backward slanting. Slides occur when the toe of the slope is undercut. They move moderately, and the consistency of material is maintained.

Topple landslides occur when the topple fails. Topple failure encompasses the forward spinning and movement of huge masses of rock, debris, and earth from a slope. This type of slope failure takes place around an axis near or at the bottom of the block of rock. A topple landslide mostly lead to formation of a debris cone below the slope. This pile of debris is known as a Talus cone.

They are commonly known as lateral spreads and takes place on gentle terrains via lateral extension followed by tensile fractures.

This type of landslide is categorized into five; earth flows, debris avalanche, debris flow, mudflows, and creep, which include seasonal, continuous and progressive.

Flows are further subcategorized depending upon the geological material, for example, earth, debris, and bedrock.

The most prevalent occurring landslides are rock falls and debris flow.

The study of landslides is critical considering the annual economic losses they bring. Globally, landslides result in expenditure of billions of dollars towards rehabilitation of affected areas. Due to these astonishing annual losses, most governments have instituted bodies to deal specifically with landslides. For example, the U.S. government created the National Landslide Information Centre to collect and distribute all kinds of data related to landslides. The body is intended to cater to landslide researchers, geotechnical practitioners involved in landslide mobilization and other individuals and organizations focused on landslide hazard analysis and mitigation. The aim is to reduce the financial burden and deaths from landslides.