What is a Valley Landform?

Valleys are the most predominant landforms on the face of the earth. They are found on virtually every continent on planet earth, along sea bottoms, and other planets. Valleys assume a wide array of forms, from broad plains to steep-sided canyons. The kind of valley created depends on numerous factors, for instance, the erosion medium, the slope of the land, the nature of rocks and soils found in the area and the time the valley takes to form. Before we delve further, let’s look at what a valley is.

A valley is a lowland area or depression found between mountains and hills often with streams and rivers running through it. It usually features rounded sides that mimic a V or a U shape. It’s created through erosion by streams or glacial actions. A valley has a lot in common with a basin; the difference is a valley has an outlet to drain the water, while a basin doesn’t. 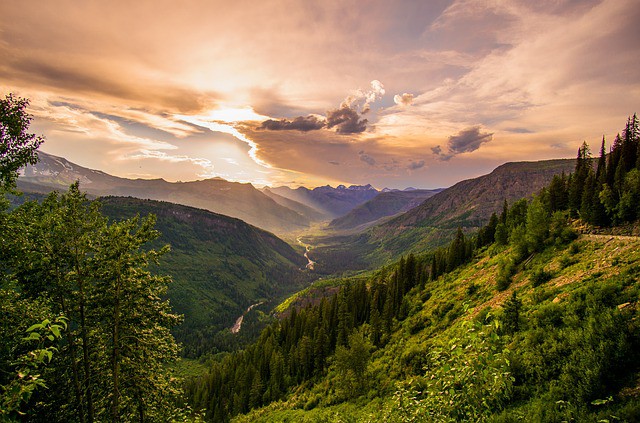 A stream is a lot different from a river. A stream is any mass of running water traveling down the slope in a distinct channel. A river, on the other hand, is a lot bigger than a stream (a large stream, essentially). A glacier is an unrelenting body of thick ice that forms on the surface of land by the process of compaction and re-crystallization of snow. Compaction and re-crystallization processes enable the glacier to survive for many years. It experiences movement due to its own weight, the melting of ice under it and the force of gravity.

How is a Valley Formed?

Stream erosion and glacial activity are chiefly responsible for any valley formation.

Streams cause massive erosion through hydraulic action and abrasion. Hydraulic action is the force applied by the water. Abrasion, on the other hand, is the grinding and scraping by the sediment picked up by the stream as it flows downhill. High up in the mountains, the stream is relatively narrow and quick-flowing. Mountains are naturally steep, so the stream flows downhill pretty quick. The flowing stream picks up pebbles and boulders that are responsible for wearing away the surface of the mountain.

Over time, the erosion of the mountain forms steep walls called valley walls. When the stream reaches a lower elevation, it slows down. In this slow state, the stream continues to erode, but at a much lower degree. It starts to twist back and forth. In the course of twisting back and forth, it curves out the valley floor in-between valley walls. Sporadically, the stream may flood part or all of the valley floor depositing materials carried along.

At the lower levels of the stream, where it comes within reach of base level, the valley it meanders through will be wide, open and flat-bottomed. The valley walls, meanwhile, will be distance away from the channel of the stream.

When glaciers move, they do two things: they pick up material and sculpt or carve out the surface underneath them. The weight of a glacier, its slow movement, and the natural gravitational force can significantly reshape existing landscapes.

A glacier moves downhill to lower elevation by the force of gravity via a mix of internal flow and sliding at its base. The ice forming a glacier is relatively dense and subjected to a lot of pressure that it starts to behave like thick tar by flowing outward and downhill. Glacial movement via this internal flow is substantially slow.

In a valley glacier, ice occurring in the upper middle part travels faster than ice occurring at the sides where it comes into contact with the valley walls. The sheer weight of the glacier also contributes to immense pressure at the base. This pressure is vital for glacial movement as it reduces the melting temperature of ice. The melting causes a layer of water to form between the glacial ice and the ground surface. The melt water minimizes the level of friction by lubricating the ground surface, enabling the glacier to slide flawlessly on its bed.

A valley glacier has a huge capability to wear away and transport massive quantities of sediment. During glacial movement, the glacial ice finds way into cracks in the rocks walls and later refreezes. The refreezing of ice water causes rock disintegration. The glacier picks up the broken rocks particles with it downstream. Some of the rock particles are so huge they can be compared to the size of a house. Theses rocks then become embedded in the ice at the base of the glacier, including along the sides of the glacier. As the glacier moves on, the embedded rock materials scrape or abrade the rocks in its path forming steep valley walls.

These kinds of valleys are created by the erosive activity of water running over the land. River valleys are usually characterized by V shape cross-sections and steep slopes. River valleys are predominantly found near sources of rivers because of the availability of steeper bank. However, river valleys can also be formed downstream.

They are typically developed by erosion. The flowing river picks up rocks and stones along the way. The total force of the flowing water and the grinding of stones and rocks carve into the river bed to create a valley. After many years, the valley becomes deeper ad wider. If a river valley grows to become deep, it’s normally called a gorge or canyon.

Glacial valleys are formed by moving glacier. Glacial ice forms over many years as a result of the accumulation of snow. A time comes when the glacier becomes heavy, and with the aid of gravitational force, it starts to move. In the course of glacial movement across the landscape, they weather away and carve out valleys the same way a bulldozer digs a trench.

This is why they have been nicknamed ‘’nature’s bulldozers.” Due to the weight and breadth of glaciers, the valleys formed are wider and flat bottoms with a shape looking like a U. Examples of valley glacier include the Fjaerland Fjord in Norway and Mattertal in Switzerland.

These are the most common kinds of valley on the globe. Flat-floored valleys are created by the action of flowing streams just like river valleys. However, they are normally older or more pronounced. As the channel stream heading downhill becomes smooth, and starts to streamline the V and U shaped valley, the floor of the valley becomes wider.

With time, the stream goes on to weather away the soils contained in the valley, further making it wider. As this process takes place, the shape of the valley is transformed from a V or U shaped to into a broad flat valley. The Nile River Valley is a classic example of a flat-floored valley.

A few facts you need to know about valleys include: