What is a Mountain Landform?

Of all the landforms on earth, mountains loom large in people’s imagination. From ancient times, many have viewed these mysterious places as home to supernatural beings or gods. Others have viewed them as the hallmark in human escapade. Mountain climbing is one such escapade and is seen as an intense experiment of human desire and endurance. Numerous climbers have managed to make it to the top of the world’s tallest mountains. Some have barely reached half of the mountains. Others have lost their lives trying.

A mountain is a kind of landform that ascends rapidly to an immense height compared to its nearby landscape. Specifically, it ascends more than 1,000 feet (305 meters) above its nearby landscapes and consists of steep sides that meet up in a summit or peak, which is a lot less narrow in width than the base of the mountain. Any raised ground that ascends not higher than 1,000 feet (305 meters) above its nearby landscapes normally consists of a rounded top and is not as rugged as a mountain; which is why it’s known as a hill. High hills occurring at a mountain base are called foothills. 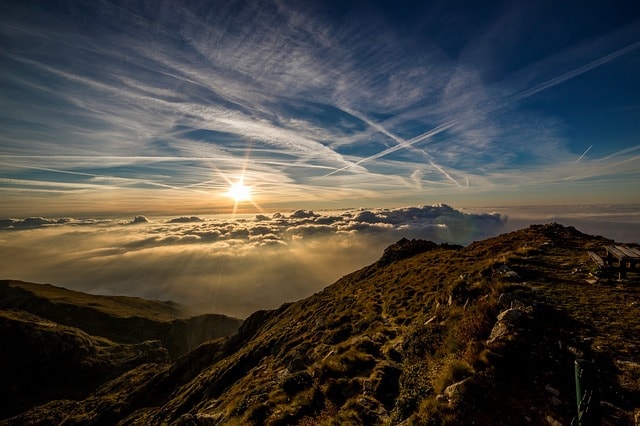 How is a Mountain Formed?

Like anything in the natural habit, mountains undergo a life cycle. They rise from a wide range of causes and are weathered and eroded by different physical and chemical processes. The formation of mountains take millions of years, and the mountain formation process has been taking place since the beginning of the earth, about 4.5 billion years ago. Yet when their rocky surfaces are subjected to the erosional forces of wind and rainfall, they start to fracture and dissolve. This is the reason why older mountains have lower and smoother appearance, while young mountains have high and rugged appearance. According to historical data, some mountains that existed on earth millions of years back have since disappeared due to the intense weathering and erosion by wind and rainfall.

Mountains can form in a variety of ways. However, these mountain formation methods have one thing in common; they take millions of years. Most mountains existing today were formed as a result of tectonic movement, earth’s tectonic plates colliding with each other, if you will. The earth’s crust is composed of numerous tectonic plates that are still in motion today due to geologic activity underneath the earth’s surface.

For instance, tectonic plates found underneath India and Asia’s earth crust collided with each other over many millions of years, culminating in the formation of the Himalayas and Mount Everest. Today, the plates are still pushing against each other, which means the mountains are still growing.

Volcanic activity underneath the earth’s crust is another way through which mountains are formed. On few occasions, molten rock, commonly known as magma, is forced up from underneath the earth’s crust due to buildup of pressure. When magma is pushed up, it slowly cools and forms a hard rock. Wind and rain eventually erode the softer rock above to expose the dome-shaped mountain below. Sometimes the pressure is so intense that the magma is forced to break through the surface. When this happens, it’s called a volcano.

Another way mountains form is through erosion. In an area filled with towering plateaus, streams and rivers can carve out rocks to form deep channels. What is left behind after millions of years is a gorgeous mountain in-between deep river valleys.

At times the crust folds and buckles. At times it disintegrates into large blocks. In both scenarios, vast areas of land are pushed up, leading to formation of mountains. Other mountains occur as a result of the earth’s crust lifting up into a dome or due to volcanic action when the crust breaks open. With that said, here are the types of mountains that form by the scenarios stated above:

These are the most common kinds of mountain on the planet. Folded mountains form majorly by the impact of folding on layers in the upper section of the earth’s crust. To put it clearly, two plates ram against each other, resulting in crumbling of their edges. You can reflect this scenario to when a piece of paper folds when you push it together. The upward folds are called anticlines, while the downward folds are called synclines. Typical examples of Fold Mountains include the Ridge-and-Valley Appalachians in the east of the U.S., The Jura Mountains, Himalayan Mountains in Europe, the Rockies in North America, the Alps in Europe, the Urals in Russia and the Andes in South America.

When pressure builds up underneath the earth’s crust, magma (melted rock) is forced up. Due to the ‘’not so intense pressure,” the magma doesn’t erupt out into the surface. Instead, it stops along the way, expands and pushes up overlaying rock layers. After some time, the magma cools off and transforms into a hardened rock. The bulged area developed by rising melted rock (magma) is known as dome, since it mimics a ball. The rock layers occurring on top of the hardened magma are subjected to upward warping to create the dome. However, the rock layers of the area around the dome remain flat. Because the dome is lifted high up than the nearby landforms, erosion by rain and wind takes place from the top. The result? A circular mountain range.

Volcanic eruptions form this kind of mountain. It has a lot in common with the dome mountain, only the magma makes it way out and erupts into the atmosphere and accumulate on the surface. When magma finds its way out of the earth’s crust, it’s called lava. When the lava accompanied by ash from beneath the earth’s crust cools, it culminates into a cone-like rock. The lava continues to accumulate on the rock forming a huge volcanic mountain. Mount Pinatubo in Philippines, Mt. St. Helens in North America, and Mt. Loa and Kea in Hawaii are some typical examples of volcanic mountains.