Rocks, minerals, soils normally change their structure under the action or influence of certain environmental forces. Biological activity, extreme weather, and agents of erosion such as water, wind and ice are examples of environmental forces that influences the continuous breakdown, wearing away and loosening of rocks and soils. This is what is termed as weathering.

Weathering is thus the process where rocks or soils are dissolved or worn away into smaller and smaller pieces due to particular environmental factors such as the examples given above. In geological terms, weathering is defined as the disintegration of rocks influenced by animal and plant life, water, and the atmospheric forces in general.

Weathering is different from erosion. While erosion is the process by which soil and rock particles are worn away and moved elsewhere by wind, water or ice, weathering involves no moving agent of transport. It is the process of breakdown of rocks at the Earth’s surface, either by extreme temperatures or rainwater or biological activity. It simply does not involve any movement of rock material. 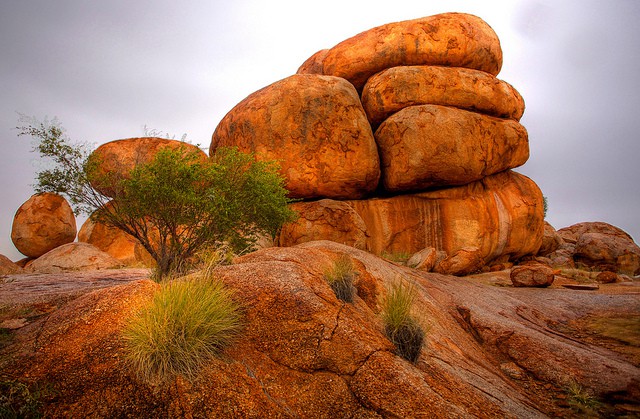 “Weathering is the breaking down of rocks, soil and minerals as well as wood and artificial materials through contact with the Earth’s atmosphere, biota and waters. Weathering occurs in situ, roughly translated to: “with no movement”, and thus should not be confused with erosion, which involves the movement of rocks and minerals by agents such as water, ice, snow, wind, waves and gravity and then being transported and deposited in other locations.”

Once the frozen water is within the rocks, it expands by about 10% thereby opening the cracks a bit wider. The pressure acting within the rocks is estimated at 30,000 pounds per square inch at -7.6°F. Over time, this pressure alongside the changes in weather makes the rock split off, and bigger rocks are broken into smaller fragments.

Another type of mechanical weathering is called salt wedging. Winds, water waves, and rain also have an effect on rocks as they are physical forces that wear away rock particles, particularly over long periods of time. These forces are equally categorized under mechanical or physical weathering because they release their pressures on the rocks directly and indirectly which causes the rocks to fracture and disintegrate.

Mechanical/physical weathering is also caused by thermal stress which is the contraction and expansion effect on the rocks caused by changes in temperature. Due to uneven expansion and contraction, the rocks crack apart and disintegrate into smaller pieces.

Organic or biological weathering refers to the same thing. It is the disintegration of rocks as a result of the action by living organisms. Trees and other plants can wear away rocks since as they penetrate into the soil and as their roots get bigger, they exert pressure on rocks and makes the cracks wider and deeper. Eventually, the plants break the rocks apart. Some plants also grow within the fissures in the rocks which lead to widening of the fissures and then eventual disintegration.

Microscopic organisms like algae, moss, lichens and bacteria can grow on the surface of the rocks and produce chemicals that have the potential of breaking down the outer layer of the rock. They eat away the surface of the rocks. These microscopic organisms also bring about moist chemical micro-environments which encourage the chemical and physical breakdown of the rock surfaces. The amount of biological activity depends upon how much life is in that area. Burrowing animals such as moles, squirrels and rabbits can speed up the development of fissures.

Chemical weathering happens when rocks are worn away by chemical changes. The natural chemical reactions within the rocks change the composition of the rocks over time. Because the chemical processes are gradual and ongoing, the mineralogy of rocks changes over time thus making them wear away, dissolve, and disintegrate.

The chemical transformations occur when water and oxygen interacts with minerals within the rocks to create different chemical reactions and compounds through processes such as hydrolysis and oxidation. As a result, in the process of new material formations, pores and fissures are created in the rocks thus enhancing the disintegration forces.

The resultant acid water from precipitation – (acid rain) reacts with the rock’s mineral particles producing new minerals and salts that can readily dissolve or wear away the rock grains. Chemical weathering mostly depends on the rock type and temperature. For instance, limestone is more prone to chemical erosion compared to granite. Higher temperatures increase the rate of chemical weathering.