What is Chemical Weathering?

When rain falls, the water is slightly acidic because carbon dioxide from the air dissolves in it. The rock may become weathered because of the minerals present in it that may react with the rainwater to form new minerals (clays) and soluble salts.

“Chemical weathering changes the composition of rocks, often transforming them when water interacts with minerals to create various chemical reactions. Chemical weathering is a gradual and ongoing process as the mineralogy of the rock adjusts to the near surface environment. ”

Chemical weathering happens because the processes are gradual and ongoing, therefore changing the mineralogy of the rocks over time that makes them to wear away, dissolve, or disintegrate. The rock’s chemical transformations are highly influenced by the interaction of water and oxygen through processes such as hydrolysis and oxidation. 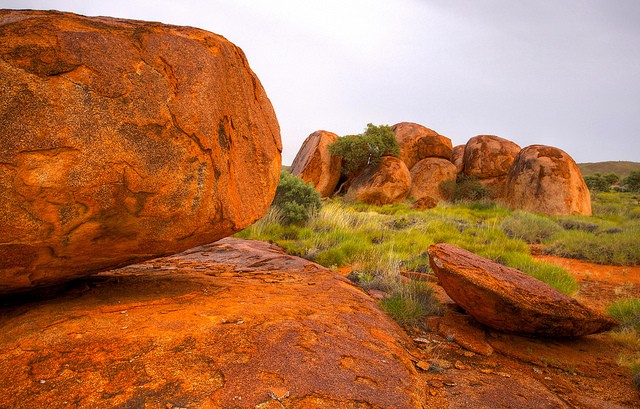 The ultimate end-result is the formation of new materials that contributes to the creation of pores and fissures in the rocks, in turn, accelerating the disintegration action. Chemical weathering involves various processes and types of weathering. Here are the detailed aspects.

Stormwater, acid rain, bio-chemical processes and mountain movements or rock uplifts are some of the processes determining chemical weathering.

Stormwater plays an important role in the hydrolysis and oxidation processes within the rocks. Stormwater can become a bit acidic by absorbing carbon dioxide in the atmosphere and as such this activates chemical action with the mineral granular particles in the rock producing chemical compounds such as salts and minerals that dissolve or eats away the rocks.

Acid rain occurs when rainwater becomes acid by mixing with acidic depositions in the atmosphere. The combustion of fossil fuels such as coal, gasoline, and gas releases oxides of nitrogen, sulfur, and carbon into the air which reacts with moisture to form rainwater that is more acidic than normal. The resulting acid rain then reacts with the rock’s mineral particles to produce new minerals and salts that can easily dissolve or wear away the rock grains.

Various plants and animals can create chemical weathering by emitting acidic compounds. As such, microscopic organisms such as moss, lichens, bacteria, and algae can speed up chemical weathering especially on the rock surfaces where they grow. They release what are termed as acidifying molecules (organic acids and protons) and chelating compounds (siderophores and organic acids). These compounds have the potential of breaking down iron and aluminum minerals in the rocks that are then dissolved by water, resulting in chemical weathering.

The process of rock uplifts or mountain movements exposes new rocks to the atmospheric conditions such as moisture and extreme temperatures, allowing chemical weathering to take place. For instance, exposure of the rocks to surface waters or rainfall accelerates chemical weathering by hydrolysis and acidic reactions that eat away calcium ions and other minerals.

The various types of chemical weathering arise since it is driven by gradual and ongoing chemical reactions, mineralogy changes, the dissolving of the particles, and then the final wearing away or disintegration of the rocks. These reactions include hydrolysis, carbonation, dissolution, and oxidation. Temperature and most importantly moisture are vital for chemical weathering.

Hydrolysis is the chemical reactions caused by water. Water reacts with the rock and alters the size and chemical compositions of the minerals, lessening their resistance to weathering. Whenever minerals are hydrolyzed, crystal rocks and clay minerals such as calcium, potassium, and sodium ions are produced.

This is how gypsum is formed. Dehydration, on the other hand, reduces the volume of the rock. A good example is the formation of hematite from the removal of water from limestone.

Carbonation is the mixing of water with carbon dioxide to make carbonic acid. Carbonation takes place when the rock minerals react with weak carbonic acid formed when water combines with carbon dioxide in the atmosphere. Carbonic acid acts on the rock by breaking down and dissolving its mineral contents. The dissolved materials are washed away by ground water, and the soluble ions are stored in the groundwater supply. Rocks such as limestone and feldspar experience this type of chemical weathering more. This type of weathering is important in the formation of caves.

Dissolution equally means leaching. It the process by which the rocks are dissolved when exposed to rainwater. Limestone and rock salts are particularly the rocks that form solvent solutions when exposed to rainwater, surface waters, or even ground water. Upon dissolving, the minerals in the rocks become ion solutions in the water which are then washed away. Karst features are a common example of this phenomenon.

Oxidation is another type of chemical weathering. Oxidation is also known as rusting. It is the process whereby the rock minerals lose one or more ions or atoms in the presence of oxygen. When minerals in the rock oxidize, they become less resistant to weathering. Oxygen combines with other substances via the oxidation process giving rise to the ion or atom lose.

For instance, iron metal rusts because its ions change from one form to another by losing one electron. It becomes red or rust colored when oxidized. In a similar manner, iron-bearing minerals in rocks go through such a process by losing ions that alter its structure and size from one form to another. The wearing away of the rocks is thus sped up by oxidation/rusting as the resultant oxides are weaker than the original materials. Change of rock color is a prime example of rock disintegration by oxidation.