What is Pacific Ring of Fire?

The Pacific Ring of Fire is the terminology given to a u-shaped area that is almost forming a ring or a circle in the Pacific Ocean expanding all the way from South America and North America to Eastern Asia, New Zealand and Australia. The stretch is approximately 40,000 kilometers (25,000 miles) from New Zealand, all the way to the West Pacific through the Philippines, Japan and Indonesia, covering parts of Bering Strait between Alaska and Russia, and extending all the way to the West coasts of North America and South America. This ring accounts for 452 volcanoes (active and dormant).

The area is widely known because of its continued seismic activity influenced by the numerous numbers of active volcanoes around the region. About 75% of all active and dormant volcanoes are found in the Pacific Ring of Fire. Geologists conjure that the violent volcanic activities in the area is because the region is very close to numerous tectonic plates that are frequently subjected to subduction. For this reason, the Pacific Ring of Fire has persisted to be an active location for volcanoes and earthquakes. 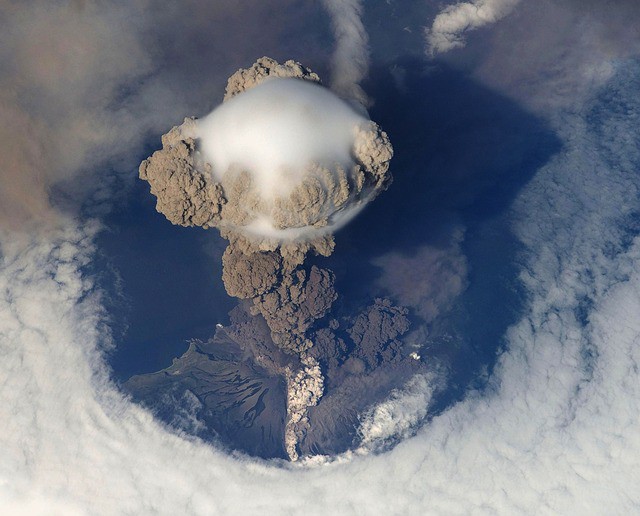 Wikipedia defines it as,

“The Ring of Fire is a major area in the basin of the Pacific Ocean where a large number of earthquakes and volcanic eruptions occur. In a 40,000 km (25,000 mi) horseshoe shape, it is associated with a nearly continuous series of oceanic trenches, volcanic arcs, and volcanic belts and/or plate movements.”

The Ring of Fire is a direct outcome of the tectonic activities in the Pacific Ocean. The lithosphere plates are in constant motion and collisions. These plates making up the outermost layer of the earth are always moving on top of the mantle and sometimes pull apart, collide, or slide past each other resulting in divergent boundaries, convergent boundaries, and transform boundaries respectively.

Subduction zones are also predominant due to the action of the tectonic movements when heavier plates slip under lighter plates, creating deep trenches. The subduction alters the heavy mantle into buoyant magma which moves up the crust to the surface of the earth. When this occurs over millions of years, the rising magma brings about a series of active volcanoes referred to as volcanic arc.

When it comes to plate tectonic boundaries, it leads to faulting, crashing, and formation of rift valleys on the sea floor which contributes to the ejection of magma and powerful shaking of the ocean floor. This leads to the formation of more cracks, vents, and fault lines which can trigger strong earthquakes and volcanic activities. The ejected magma is cooled by the seawater to form new crust, creating high ridges on the ocean floor. The East Pacific Rise is one of the major locations experiencing fast seafloor spreading in the ring of fire.

The Pacific is a region with numerous plate tectonic boundaries. As a result, there is a constant activity of the plates pulling apart, colliding, or sliding past each other resulting in divergent boundaries, convergent boundaries, and transform boundaries respectively. The eastern section of the Ring of Fire for instance is as a result of the Cocos Plate and Nazca Plate being subducted under the wesward moving South American Plate.

Furthermore, the southern section is even more intricate and exhibits the collisions of several tectonic plates. This includes collisions with the Pacific Plate from the Philippines, Mariana Islands, New Zealand and Tonga. The Australian, California, and Indonesian plates also show similar signs on the active plate boundaries activities.

It is undeniable that most of the world’s active volcanoes and volcanic activities are within the Pacific Ring of Fire. Therefore, they account for one of the major causes of the active geological activities in the Pacific. Most of the regions on the Ring of Fire show an attribute of active volcanic activities. It stretches right from the western edge, from the Kamchatka Peninsula in Russia through the Japan Islands and Southeast Asia, to New Zealand.

For instance, Mount Ruapehu in New Zealand is among the most active volcanoes within the Ring of Fire and records minor eruptions every year and major eruptions in almost every five decades. On the Indonesian pacific, the Krakotoa eruption is quite frequent. The same applies to the Australian pacific.

Major Volcanic Areas in the Pacific Ring of Fire

Mount Ruapehu is in New Zealand section of the pacific, on the southern end of the Taupo Volcanic Zone. It is among the most active volcanoes within the Ring of Fire and records minor eruptions every year and major eruptions in almost every five decades. According to history, it started erupting 250,000 years ago. Over the years it has produced several explosives scoria cones, craters, and lava flows. In December 1993, 151 people lost their lives as a result of Mount Ruapehu volcanic activity.

Krakatau, also referred to as Krakatoa, is an Indonesian island that exhibits active volcanic activities. However, it erupts less often compared to mount Ruapehu. Below Krakatau, there is an extensive plate tectonic activity the influences the volcanism. The denser Australian Plate below Krakatau is under subduction beneath the Eurasian Plate.

A very destructive eruption took place in 1883, destroying the entire island and emitting large scores of volcanic ash, gas, and rocks high into the air at a height of more than 80 kilometers (50 miles). Since, minor eruptions still take place at the new island volcano.

Mount Fuji is in Japan and is the most famous and tallest mountain in the region. It is still an active volcano in the Pacific Ring of Fire. It erupted last in 1709 and it has been recently reported to be active due to the tectonically active processes, mainly earthquakes. Mount Fuji is as well located at a ‘triple junction,’ where three tectonic plates interact. These include the Philippine, the Amur, and Okhotsk Plates.

The eastern half of the Pacific Ring of Fire has several active volcanic areas including the Trans-Mexican Volcanic Belt, the Andes Mountains, the Aleutian Islands, and the Cascade Mountains in the Western United State which also includes Mount St. Helens.