When you stand at a vantage point of space, you’ll be treated to an array of breathtaking landforms. However, these beautiful pieces of nature can only qualify as landforms if nature created them. This means human-made dams, vehicles, and buildings cannot be called landforms. Mountains, hills, plains, plateaus, beaches, sea stacks and canyons all qualify as landforms since they’ve been formed by nature over time. The whole process of landform formation is known as erosion.

Erosion is the wearing away of the earth’s surface by the action of natural forces, for example, water, wind and glacial ice. The loose and dissolved materials move from one location to another. Erosion should not be confused with weathering. Weathering is where rock is broken down and dissolved into tiny particles by chemical, physical and biological processes. Think of weathering as the process of breaking down rock using a hammer. Erosion moves the weathered rock particles to another location by the action of water, wind, ice and gravity. Transport renders the erosion process complete since it’s the part that entails movement of weathered materials and other particles from the source to other locations. 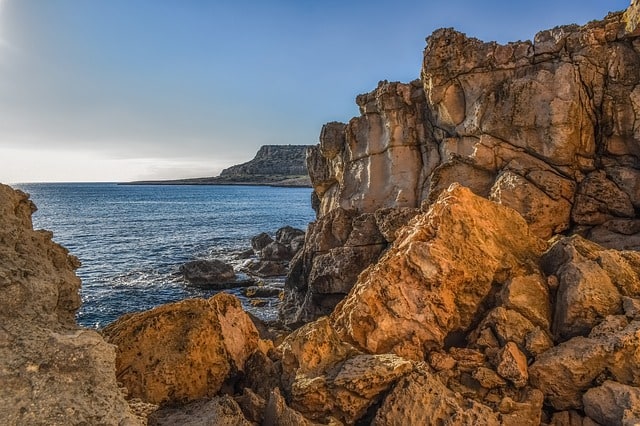 Water is a liquid drank by humans, animals, and plants. It’s also produced during photosynthesis. Rain and subsequent flowing water carry along weathered rocks and other particles to be deposited at lower elevations.

Ice forms during periods when temperatures considerably drop, resulting in the pile-up of snow and ice. The result is continental ice sheets. Ice sheets erode mountain surfaces over time to form beautiful landforms. The movement of ice downhill causes erosion of underlying rocks, leading to nicely carved up landscapes.

Waves are moving swells or ridges in a water body. Kinetic energy is transmitted in the direction of the wave movement. The energy is capable of carrying away sand particles to different locations.

Repeated erosion washes away the topsoil. The top soil is loaded with nutrients and organic matter critical for crop growth. Extensive erosion also minimizes the depth of soil available for water storage and rooting. Repeated erosion reduces water infiltration into the soil, which may result to withering of crops. Erosion also enhances run off, which create unsightly gullies.

Erosions may also culminate to landslides, which can damage buildings and cause deaths to people living at the foot of the hills or mountains. The cost incurred in the rehabilitation of an area after a landslide is substantial.

Young plants may fail to make it to maturity due to being blasted by particles flown around by wind. An extra cost of cultivation will be incurred due to the need to level up eroded surfaces.

Erosion leads to huge deposition of sediments into drains. This may cause drainage problems. Water sources such as rivers, streams, and lakes can be polluted through extensive inputs of pesticides, nitrogen and phosphorous.

Deposition of sediments in rivers can damage river ecosystems. Deposited sediment pollutes rivers and cuts off oxygen supplies leading to fish deaths. Deposited sediment in rivers can also cut off supply of fresh water to people living downstream. These communities would be forced to find alternative sources of water or walk distances in search of this precious commodity. Increased deposition of sediment and runoff can lead to massive flooding downstream. Flooding can destroy property and cause deaths. Floods are fertile breeding grounds for mosquitoes. This might result in the upsurge of malaria in the area.

What is Water Erosion, Wind Erosion, and Glacier Erosion?

Water plays a significant role in rock erosion since it’s able to move these weathered materials from one point to another. Moving water such as currents in oceans or rivers plays a significant role in erosion because they move materials from their primary source to a separate location. Erosion may discolor rivers as they snake through the valleys to oceans or seas. This is due to the huge amount of sediment deposited by the process of erosion. Once these eroded materials are settled and piled up in a new location, it is referred to as deposition. Water is also able to erode land by the effects of currents and ocean waves. Once the eroded particles as a result of ocean currents and waves are settled and deposited, they enormously change the coastline of the area.

Wind blows away weathered particles from the source to other locations. Wind can also speed up the erosional capability of water. For instance, when a rain drop is released from the sky, it’s relatively weak. The force of the wind gives it more momentum such that when it hits the surface of the earth, it able to carry away a significant amount of particles.

Due to the effect of wind, the rain drop can travel at a speed of 32km/hr. At this breakneck speed, it’s able to steadily break down rock material and soil, and make erosion and transportation a lot easier. The effect of wind is usually manifested in areas that experience less or no rain or dry and barren land that is not capable of supporting vegetation.

A typical example of this phenomenon is the Middle East dust bowls that took place in the course of the great depression. Wind causes erosion of rock particles driven by soil and sand particles that are not tightly glued together and not insulated by vegetation. The carrying away of dry soil and loose sand particles is known as deflation. The action of wind continues until that time when the power and momentum of wind cannot move the loose particles.

Glacier is an enormous sheet of snow-covered ice that slowly accumulates on a mountain. When the ice below it starts to melt, the glacier may start to move, consequently, eroding the mountain. Glaciers form in areas that are frequently covered by snow. The amount of snow falling each year usually outweighs the amount that melts, resulting in massive accumulation of snow.

When snow accumulates, the snow above exerts a lot of pressure on the snow below, which triggers it to recrystallize and transform into solid ice. As the glacier moves across the landscape, it picks up almost everything in their path including sand grains and giant boulders. As these sand grains and giant boulders get hauled over across the bedrock, they act as cutting tools carving out the bedrock as the glacier moves. This pretty much explains how glacier causes erosion.