Fold occurs when rock deforms in such a way that it bends instead of breaking. The rocks, like any other material, deform to the action of external efforts. We do not grasp this deformation, but we know when a rock is deformed. Folds come from pressure on the rocks that occur over very long periods of time and vary in size from microscopic crinkles to mountain-sized folds.

Any material can be deformed in three ways:

The material is deformed, but when the effort ceases, the deformation disappears (e.g. a rubber band). It is, therefore, a reversible deformation.

The material is broken in response to stress (would be the case of a broken glass). Like the above, it is also irreversible.

When these deformations occur in the Earth materials, they result in recognizable geological structures, such as:

The elastic deformation, by its nature, will not leave lasting geological structures. This does not mean that this type of deformation is not given. It is quite common in earthquakes. 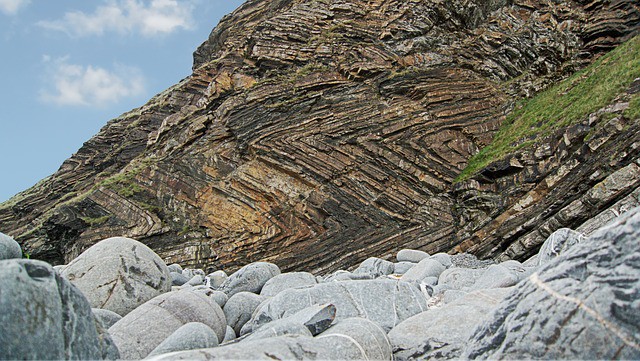 What are the Geological Folds?

Geological folds are the curvatures in rocks or strata containing them. Most visible stratified rocks are located in the rivers, quarries or coasts were, originally, sediment layers deposited in horizontal or near horizontal beds. However, when we observe today they are not only solidified but usually inclined in one direction or another.

Sometimes when the layers come to the surface, you can see a bow or climb to descend into a breast. The folds are measured in terms of wavelength (peak to peak or breast to breast) and height (peak-to-trough). They may be microscopic or have lengths of kilometers.

An isolated fold is defined by the maximum undulation curvature of the strata. The hinge is the line connecting the points of maximum folding in each layer. The axial plane defined meets these lines in successive layers. The shaft is any line parallel to the line bed ripple. When the shaft is tilted from the horizontal is said to be immersed.

In the upright folds, the axial planes are vertical, while in the reclined tilt or dip and are sub horizontal. In the latter, the upper side can detach pushing the bottom and form a structure known as mantle, common in the Alps or the Pyrenees.

“A geological fold occurs when one or a stack of originally flat and planar surfaces, such as sedimentary strata, are bent or curved as a result of permanent deformation. Synsedimentary folds are those due to slumping of sedimentary material before it is lithified. Folds in rocks vary in size from microscopic crinkles to mountain-sized folds.”

The folds arise as a result of the tectonic pressure and stress in the rocks and rather than fracture, they fold. They are easily visualized by the loss of horizontality of the strata. When tectonic forces acting on sedimentary rocks are a number of characteristic forms. Sedimentary rocks are more flexible than the metamorphic, and when the thrust is not intense enough to move them fold as if they were a piece of paper.

A fold is a bending of the rocks of the earth’s crust. It is structured in the form of waves, successive. As such some of the features of the folds correspond to a wave either.

The rock layers in folds can be folded in two ways: as a result of transverse bending and by longitudinal bending.

The layer is bent under the action of forces applied perpendicular to the layer plane direction. For this slouch, various forces must exist. The folds that arise in this case are caused by the transverse bending folds. The most characteristic among them arise as a result of the action of vertical forces applied to the horizontal layers.

For example, the bending folds transversal firm layers that cover the crystalline basement, elevated above the block bounded by the fractures. The forces that form pairs are directed from the bottom up to meet the latter and are caused by the gravitational force, which holds the layers in its original level outside the boundaries of the block that rises.

It arises under the action of the compressive force parallel to the direction layers. The latter, during the longitudinal compression, loses its stability and deforms rather than uniformly thickening, they are curved. The role of the layered structure of the rocks during the transverse and longitudinal deflections is not the same.

During transverse bending, even if there are no mechanical dividing determined by stratification, the deformation end with the formation of a fold. For example, if the layers are drawn simply in the side wall of a plastic test tube and, therefore, they cannot play any mechanical role. A result of the first deformation will turn out to be in a curved fold transverse bending.

The longitudinal bending plays a different stratification geological folds in principle: without the latter in any way that may form folds, since one of the conditions for their formation necessary during bending is longitudinal slip between possible layers. The slouching packet divided by folds of strata slips relieved surfaces, all sliding layer to the underlying, towards the dome and anticlinal respect to the overlying, towards the hook syncline.

Due to friction, to bend the strata, all inside layer is under the action of a pair of forces, one of which (on the roof of the layer) is directed towards the anticlinal dome. The other (in the wall layer) is directed to the hook of the syncline. This torque tends to cause a deformation in the displacement layer.

They can be classified according to various factors independently.

Any plane can be oriented in space by two measures, which are its geographical orientation and tilt angle.

In the strata and other geological background, such as fault planes or axial planes of the folds, these two measures are called strike and dip. Both measures are obtained by intersecting any plane with a horizontal theoretical level because that is the original position of strata.