First and foremost, rain is a form of precipitation that involves a downpour of condensed, super-cooled vapor as droplets of liquid water under the influence of gravity. Each droplet of water is usually greater than 0.02 inches (0.5mm) in diameter. Raindrops range in size up to about 0.13 inches (about 3mm) and the rate of fall increases up to 25feet (25m) per second. Larger raindrops tend to be flattened and broken into smaller raindrops as they fall rapidly through the air.

However, the precipitation of smaller raindrops, referred to as ‘drizzle’ impairs visibility, but does not produce significant accumulation of water. The downpour of the condensed, expanded air as droplets of liquid water could be heavy (more than 7.50mm or 0.30in per hour), light (not more than 2.5 mm or 0.01in per hour) or moderate (between the limits state for heavy and light rainfall) depending on the density of the condensed air and the type of rainfall (convectional, relief / orographic, frontal / cyclonic). 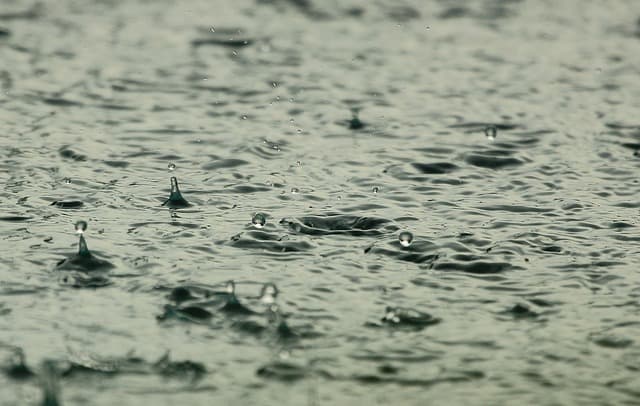 Rainfall is a measure of the total amount of water that falls as rain, in a given area, over a period of time. The American Heritage Science dictionary defines rainfall as “The quantity of water, usually expressed in millimeters or inches, that is precipitated in liquid form in a specified area and time interval”.

How Can Rainfall be Measured?

Rainfall is measured by meteorologists and hydrologists or interested scientists or persons through the use of a rain gauge. A rain gauge is also known as, ‘pluviometer’, ‘udometer’ or an ‘ombrometer’. The rain gauge is used to collect and measure the amount of liquid precipitation over a given period of time. Furthermore, a rain gauge has two important parts, necessary for the measurement of rainfall, these are:

This type of rain gauge is made of a collector funnel that directs rain water into two small containers. The containers are located on either sides of a horizontal plane. When the containers are filled to the required weight, they flip horizontally and discharge the rain water collected under the influence of the force of gravity. The amount of precipitation is estimated from the number of flips performed by the basket, as detected by an optical or mechanical system.

This type of rain gauge has a funnel or collecting part on top of a laser diode or photo diode. The funnel directs the rain drops towards the light beam and the rate of precipitation is electronically determined by measuring the intensity of the scintillation generated.

To avoid water rebound or splashes from the floor or objects around a rain gauge, they must be placed at about 3 feet from the ground and at a distance of several feet away from other objects in the area of collection. Also, the cone of the funnel should be deep enough, to aid easy flow of rain water into the gauge and minimize splashes. Again, mesh filters should be used, to prevent debris like bird droppings or leaves from clogging the gauge.

There are three major types of rainfall. They are as follows:

This type of rainfall occurs mostly in the tropics, through a series of evaporation and condensation processes. As heat from the sun raises the temperature of the ground surface, heat released from the surface warms up the layer of air above it. This, in turn, causes the heated layer of air above the heated ground surface to expand, cool down and rise. The ground surface, being exposed to high temperatures from the radiation of the sun, continues to cause the air above it to become warm, expand, condense and rise into the atmosphere.

Furthermore, the layers of air continue to rise, expand and become cooler as they move higher in the atmosphere. This continues until a point is reached where the cooled layers of air become too dense to rise higher in the atmosphere. At this point, the layers of super-cooled and expanded air fall back onto the surface of the Earth as droplets, otherwise referred to as rain, under the influence of gravity. The droplets are usually greater than 0.02 inches in diameter.

Convectional rainfall is usually associated with the formation of cumulonimbus clouds. Also, constant high temperatures, as found in the tropics, as well as an abundant amount of moisture, to partake in the evaporation and condensation processes are necessary for this type of rainfall to occur.

This occurs when wind blowing over the sea encounters an obstruction, usually a highland or mountain. The orographic effect occurs when moist air flowing from the ocean encounters a mountain barrier and is forced up over the mountains. The air continues to cool as it rises, and the moisture condenses and precipitates as rain or snow on the windward side of the mountain.

This type of rainfall occurs when currents of warm air meets an opposing current of cooler parallel flowing air. The cool air being denser than the warm air forces the warm air upwards. Therefore, the warm air rises as a result of the upward thrust by the cooler air, expands, condenses and becomes denser as it travels higher in the atmosphere.

The condensed air reaches a point in the atmosphere where it becomes too dense for upward movement; therefore, it falls back as rain.