What is an Island?

The term ‘island’ refers to a piece of land surrounded entirely by water. Islands are usually smaller than a continent. They may occur in seas, oceans, rivers or lakes. From the geographical point of view, the only difference between an island and a continent is the size. Although continents also surrounded by water, they are not considered islands as they possess a much larger land mass when compared with islands.

From the biological point of view, islands differ from continents in the sense that their isolation controls the number and variety of animal and plant species found. More often than not, two islands comparatively near each other have very different flora and fauna. Structurally or geologically, continents differ markedly from inland, coral, and volcanic islands. A collection of islands is referred to as an ‘archipelago’. 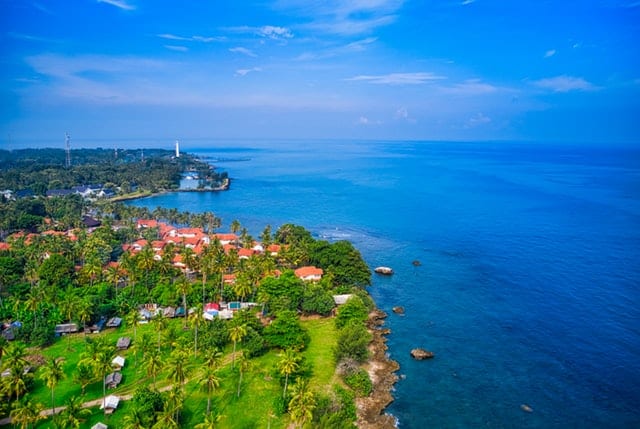 There are six (6) major types of islands. They are:

The following is a description of the various types of islands known, as listed above:

This type of island is one whose existence is highly dependent on tidal action. It refers to pieces of land that are more visible at low tide but submerged during high tidal action. Tidal islands are one of the most common types of Islands in the world. Typical examples include Jindo and Mondo in South Korea, St. Michael’s Mount in the United Kingdom, Cramond Island in Scotland and many others.

They are coastal landforms that are often characterized by flat, lumpy areas of sand which result from wave and tidal action parallel to the mainland coast. They are closely related to the dune system. Barrier islands occur in chains which comprises few islands to large numbers of islands. The form of this type of island is subject to change during storms and other related violent movements of air. They are known to function in protecting the coastlines in which they occur and absorb excess energy.

Barrier islands may remain uninterrupted over several kilometers with the exception of tidal inlets which separate the islands. The widest and longest barrier island is known as Padre Island of Texas. Properties of barrier islands are often related to the following parameters: Wave energy, Tidal wave, sediment supply, basement controls, and sea-level trends. Components of barrier islands include:

The lower shore face is the part of the barrier where the ocean meets the shore of the island. The body of the barrier island itself separates the shore face from the backshore and lagoon/tidal flat area. Fine sands with mud and possibly silt characterize barrier islands. Moving deeper into the ocean, it would be noticed that the sediment becomes finer. At this point, the effect from the waves is usually very weak due to depth.

This shore face is strongly influenced by wave action because of its depth. Within a short distance to the shore, grain sizes would be medium size sands with shell pieces common. Since wave action is heavier, bioturbation is not likely.

In barrier islands, an upper shore face is constantly affected by wave action. Herringbone sedimentary structures result. This is because of the constant differing flow of waves. Grain sizes found in this part of barrier islands are usually in the range of larger sands.

In barrier islands, a foreshore is an area of land between high and low tide. It is similar to the upper shore face, the fore shore constantly affected by wave action. Cross beddings and laminations are usually present and coarser sands are present because of the high energy present by the crashing of the waves. The sand is also very well sorted.

This component of barrier islands is always above the highest water level point. A berm is usually found here. The berm marks the boundary between the foreshore and backshore. The wind is an important factor here, not water. High waves, Strong storms, and wind can deliver and erode sediment from the backshore.

Dunes are typical features of a barrier island. They are usually located at the top of the backshore. Dunes are made by the wind. See Coastal Dunes for more information. The dunes will display characteristics of typical Aeolian windblown dunes. Here, the difference lies in the fact that dunes on a barrier island typically contain coastal vegetation roots and marine bioturbation.

The Lagoon and tidal flat areas are located behind the dune and backshore area. The water is usually still and allows fine silts, sands, and mud to settle out. Lagoons can become host to an anaerobic environment which enhances the formation of high amounts of organic-rich mud. Vegetation is also common in this component of barrier islands.

This type of island does not sit on the continental shelves but rise to the surface from the floor of the ocean basin. They are of volcanic origin, thus, they are also referred to as ‘volcanic islands’. During the formation of this type of island, lava accumulates up to a point where it protrudes from the ocean basin and finally goes above the ocean surface, where it is physically seen as an island. The following are the various types of oceanic islands

A fringing reef grows on the outer side of the volcano as it emerges. Eventually, the volcano moves away from the hot spot through a process referred to as ‘plate tectonics’. Thus, subsidence occurs as the volcano becomes unable to keep up with the erosion due to the ocean.

After the island has been submerged, the coral must keep growing in order to keep its space in the epipelagic zone. The coral then grows into an atoll (possessing a shallow lagoon in the middle, which undergoes ‘accretion’ to create an island that consists mainly of carbonate materials). The remains of plant life further aid the formation of coral islands.

Continental islands are a type of island which was connected to a continent at some point in time. They sit on the continental shelf and may have been formed as Earth’s shifting continents broke apart. Scientists are of the opinion that there was only one large continent on Earth several millions of years ago.

The continent is said to be known as Pangaea. Pangaea is referred to as a supercontinent which broke into several pieces which drifted apart due to slow movements of the Earth’s crust. The series of events is believed to have led to the formation of continental islands. Examples include The islands of Greenland and Madagascar.

This is a type of island made by people. Various intents are behind the creation of artificial islands, such includes Aesthetics and establishment of tourist attraction sites. In creating artificial islands, a new site might be established through the use of materials brought in from elsewhere e.g The Dubai waterfront, while on the other hand existing islands could be expanded or modified.