The river Nile is one of the ancient rivers of the world. Since the time human civilization and habitation evolved, the mention of this river can be found. The river has various exciting features that make it one of the most abundant rivers in terms of silt deposition. Let’s find out 20+ amazing facts about the Nile. 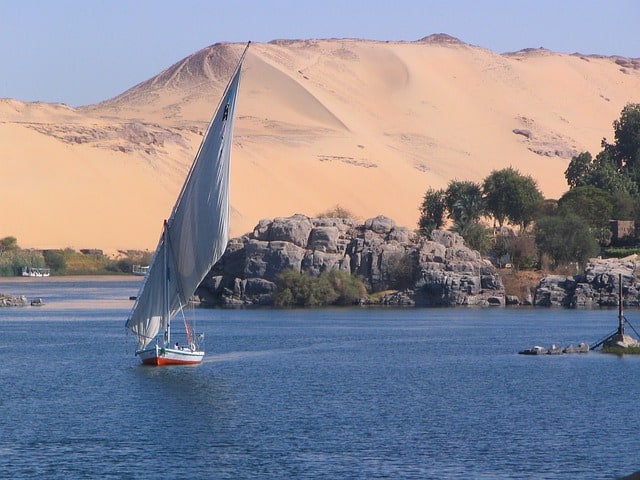 20+ Enchanting Facts About the River Nile

The river Nile has immense significance on the history and evolution of the Egyptian Civilization. It flows throughout the country and is the country’s major water source. Most of Egypt is a desert zone, and rainfall is not so dense here. The Nile seems one of the significant perennial sources which are helping various needs of the Egyptian people.

The river Nile is known as the longest river in the world. It covers a distance of 6695 kilometers (4160 Miles).

Fact 3. Location of the River Nile

Though this river has immense significance over the evolution of Egyptian civilization but, one should not be mistaken about its actual location. Before entering Egypt, the river covers nine different countries, and it finally ends into the northern edge of Egypt in the Mediterranean Sea.

There are various theories regarding the starting location of this ancient river. One of the acceptable arguments suggests that the river starts its course from the area of Lake Victoria. Again, Lake Victoria has various feeder rivers which seem to merge in this location. The Kagera River is said to be the biggest feeders and is known as the real source of the river Nile.

Fact 5. The Endpoint of the River Nile

After passing through nine different countries, which are Tanzania, Uganda, Burundi, Rwanda, Kenya, Zaire, Ethiopia, Sudan, and Egypt, the river merges into the Mediterranean Sea.

The river Nile has two major tributaries, which are the Blue Nile and the White Nile. But wait, you won’t be witnessing a blue color or a whitish version of the river. The names came from the amount of silt deposition made by the river.

Fact 7. The Blue Nile and the White Nile

The Blue Nile and the White Nile meet in Sudan to form the main Nile River. But the source of White Nile is not Lake Victoria but somewhere in between Rwanda, Ethiopia, and Burundi, the actual source of the river is established. Moreover, both the tributaries play an essential role in the perennial water supply, which reciprocates the constant flow of water throughout the year.

The name ‘Nile’ has originated from the Greek word ‘neilos’ that refers to ‘valley.’ During the ancient Egyptian civilization, this river was referred to as ‘Ar’ or ‘Aur.’ These two words mean the same that is “black.”

Fact 9. Why did the Ancient Egyptians call it the Black River?

The Egyptian civilization developed mainly in the location which was created from the silt deposition of this ancient river Nile. Along its long course, the river brought silt which was formed from chunks of boulders, rocks and plant debris. This silt is known as one of the richest natural soil in the world. It is this mineral-rich feature of this river that got it referred to as the Black River.

Fact 10. The age of the River Nile

The existence of the river Nile can be found as early as 3000BC. From the archeological evidence, it has been established that the quality amount of farming was practiced along the banks of this river. Moreover, the entire ancient history of Egyptian civilization is associated with this great river.

Fact 11. Significance of the River Nile

The river Nile is the primary source of water supply not only in Egypt but also supports ten percent of Africa’s water supply. The Egyptian Civilization since the days of Pharaohs has been extensively using the river Nile for various practices that are essential for livelihood.

Fact 12. The Portion of Egypt Depending on the Nile

About eighty percentage of Egypt falls on the banks of this river, and the entire country is mostly dependent on this river for the annual water source as there is a shortage of rainfall in this geographical region.

The river brings very rich and fertile silt along with it. Since its path is very long, the portion it flows through Egypt gets the maximum silt deposition which formed the large delta on which the land of Egypt is situated.

The river Nile never gets dried up, and yearly floods are frequent in this river. From the early days to date, if you carefully look at the map, you can notice that the river has changed its actual course and shifted a bit. Every year during the flood, the river used to deposit fertile soil on the banks of Egypt.

When the water dried up, the Egyptians used this fertile land for cultivating crops. Yearly floods helped the civilization to yield high-quality crops with higher productions, and they could also use the river for transporting their products to other lands.

The river Nile, whose journey started around five million years ago, played a vital role in Egyptian history. Every year between June and September, this river flooded its bank. This occurrence was a yearly process, and the submerged land became more fertile each year. But on the other hand, Egypt faced the loss of lives and various damages due to this flood, which turned devastating at times.

The construction of the Aswan Dam on river Nile started in 1960, and it was by 1970s that the annual flood could be controlled. This helped use the natural source in household activities, and in one word, the water of Nile is the primary source of water supply even for modern day Egypt.

The river Nile was one of the major trade routes which helped the Egyptians to take their products to the other parts the word. The paper we use today was first made from the leaves of papyrus, a leaf of a plant which is grown on the banks of this fertile river. The perennial water flow helped the merchants to bring goods through the waterway, which made transportation an easy process even in the medieval period.

Fact 16. Assisting in the Construction of Pyramids

Egypt is referred to as the land of great Pyramids. These ancient tombs were built on blocks and chuck of rocks. During the ancient civilization, from the size and height of the pyramid, the status of the King or Pharaoh was determined. Tons of rocks were required in the building process.

The river water was used as the means of transportation for accumulating and gathering the stones and blocks for the pyramids. Even the regular water requirement for the pyramid worker was met with the water of this ancient river.

Fact 17. Flora Along the River Nile

A wide variety of vegetations makes the destination an ideal tropical rainforest area that is mostly covered with thick forest patches. Trees like rubber, bamboo, banana, coffee shrub and ebony with patches of mixed woodland and savanna are present here. There is also a grass ground cover with perennial thorny trees and mixed shrubs.

During the rainy season, the land becomes very swampy, making it a desirable location for the growth of tall grasses similar to bamboo. These species are known as papyrus. South American water hyacinths are witnessed, especially where there is less current on the water surface.

Crocodiles, Hippos, buffaloes, and antelopes are familiar creatures that are found in this area. The crocodiles which are found in the Nile basin are recorded as the world’s largest species that can gallop half the weight of its body in one sitting.

Fact 20. The Nile and Present Egypt

The river Nile is still an essential part of modern Egypt. Major transport routes are developed via the river, and the portion of the river bank outside the city is still used as a land for farmers. Irrigation and water demand of the country is primarily met by this river.

In a nutshell, without the presence of the river Nile, the Egyptian Civilization couldn’t have evolved. And, in the present day also, the Nile remains an integral part of Egypt and its people.

A professional writer, blogger, copywriter, and a member of the International Association of Professional Writers and Editors, New York. He has been part of many reputed domestic and global online magazines and publications. An avid reader and a nature lover by heart, when he is not working, he is probably exploring the secrets of life.

Latest posts by Arindom (see all)