What is a Rainbow?

Rainbows are multi-colored arcs which result when light strikes water droplets. They result from the refraction and reflection of light. Usually, rainbows are full circles with the antisolar point (i.e the imaginary point directly opposite the sun) being the center of the circle. The full circle of rainbows is more easily observed by passengers in an aircraft than a viewer at sea level.

This is because, viewers on the ground can only see the light reflected by raindrops above the horizon, thus, due to the differences in individual horizons, no one actually gets to see a full rainbow, since our antisolar points are quite different. Various types of rainbows exist with the most familiar type being the one produced when sunlight strikes raindrops in the sight of a viewer, usually at a precise angle of 42 degrees. 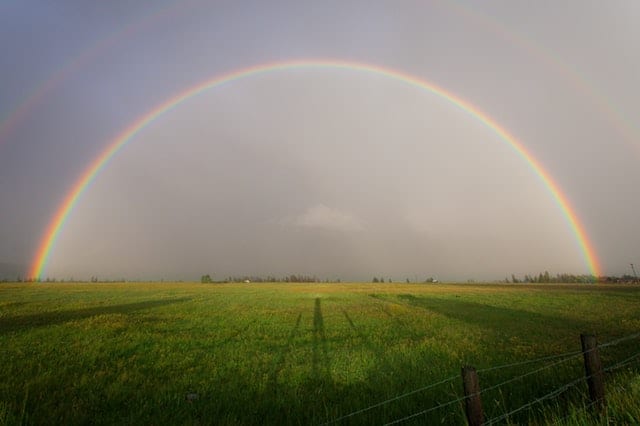 The colorful sight could also be seen around sea spray, fog or waterfalls. The fact of the matter is that a rainbow is an optical illusion. It does not exist in the real sense in any specific spot on the sky – the location of the rainbow seen is dependent on the location of the viewer and the antisolar point corresponding to the location.

How is a Rainbow Formed?

Thus, when sunlight hits a rain droplight, some of the light is reflected and the electromagnetic spectrum (comprising the various colors mentioned earlier) is separated. This produces a visual perception of the various bands of the electromagnetic spectrum as different colors. This is called a ‘rainbow’. Usually, colors of the rainbow overlap at the edges, producing a sheen of white light which makes the inside of the rainbow appear brighter than the outside and tail portions of the observed rainbow.

In studying the rainbow, scientists take into consideration the fact that the electromagnetic spectrum contains other rays apart from visible light (e.g Gamma rays, X-rays, Ultraviolet light, Microwave, Infrared and radio waves), therefore, a spectrometer is used by the scientists in studying the invisible parts of the rainbow.

Various rainbow variations have been observed. They include

Interesting Facts About the Rainbow

The following are some interesting facts about rainbows:

Fact 1: The colors on a rainbow are usually in the order of wavelength (shortest to longest). Thus, most primary rainbows contain colors in the following sequence: Red, Orange, Yellow, Green, Blue, Indigo and Violet.

Fact 2: The colorful rainbow can only be observed whenever it rains or water is pumped at high pressure through pipes in the presence of light. The observed rainbow is shaped like an arc (very similar to the archer’s bow). Its shape is the major reason why it is called a ‘rainbow.’

Fact 3: The myth of the Rainbows several colors was uncovered by Sir Isaac Newton as a result of his works on the electromagnetic spectrum and the various components of the spectrum.

Fact 4: In order to observe any rainbow, light must be refracted at an angle of 42 degrees. The refraction of light at this angle is the major reason why we can observe the various bands of white light with our naked eyes. Failure to attain this critical refraction angle results in the absence of rainbow observed by our unaided eyes.

Fact 5: While the rain is very important for rainbow formation, the sun is equally important. This is because each of these factors has major roles to play in the reflection and refraction processes which eventually results in the observation of a rainbow.

Fact 7: Interestingly, a type of rainbow can be formed at night. This rainbow is called a ‘moonbow’. Moonbows are very rare sights because moonlight is not as bright as sunlight, thus, despite the refraction of light in the same way as occurs in the presence of sunlight, the various bands of visible light are not usually pronounced. Again, the darkness characteristic of nights makes it very difficult to observe the colorful bands of visible light characteristic of rainbows.

Fact 8: At ground level, rainbows are seen as ‘arcs’ or ‘semi-circles’ while rainbows are viewed as ‘full circles’ from a great altitude (e.g from an aircraft). This has been said to be due differences in the position and consequent differences in antisolar points of the respective views.

Fact 9: The end or a rainbow cannot be reached. This is due to the fact that rainbows, like the moon, moves along with the view, thus, rainbows cannot be said to have a static or stationary position in the sky.

Fact 10: Rainbows can be scientifically explained, thus they can be said to be an important scientific phenomenon. They result from the refraction of light which bends the stream of white light and causes the components to separate as several binds as the light is directed from passing through the air (less dense medium) into water droplets (a denser medium).

Fact 11: Rainbows can be observed in the absence of rainfall! This explains the observation of rainbows at waterfalls. All that is needed to produce a rainbow includes white light, air (less dense medium), water (denser medium) and conditions that can make refraction occur at 42 degrees!

Fact 12: The popular saying that ‘no two persons can see the same rainbow’ is valid. This can be explained from physics principles, in which it can be understood that the light refracted by the same raindrop is at a different angle (necessary for observing a rainbow) when observed from the next person’s point of view. Thus, the rainbow observed by the next person is one which has been refracted at an angle of 42 degrees to the observer’s eye.

Fact 13: Combination rainbows (e.g double, triple and quadruple) can be observed. This occurs when the light inside the raindrop reflects twice (producing a double rainbow); reflects three times (producing a triple rainbow) and so on.

Fact 14: Usually, rainbows do not occur at noon! This can be explained by the fact that, for a rainbow to be formed, light must strike a raindrop at exactly 42 degrees (which is not possible at noon, as the sunlight reaching the atmosphere is at an angle greater than 42 degrees.