30+ Thrilling Facts About Mount Everest That Will Leave You Spellbound

Mount Everest is one of the most common 8000+ mountains in the Himalayan mountain range. Every year hundreds of people across the globe try their luck to climb Mount Everest. It takes a huge amount of courage, strength, loads of money as well as the willingness to risk your body to reach the top of Everest. Not everyone gets lucky to see the peak of Everest as most of them lose their way and meet a tragic end. Here in this article, we have compiled a list of 30+ thrilling facts about Mount Everest that will leave you spellbound.

Mount Everest, known in Nepali as Sagarmatha and in Tibetan as Chomolungma is Earth’s highest mountain above sea level, located in the Mahalangur Himal sub-range of the Himalayas. The international border between Nepal (Province No. 1) and China (Tibet Autonomous Region) runs across its summit point. 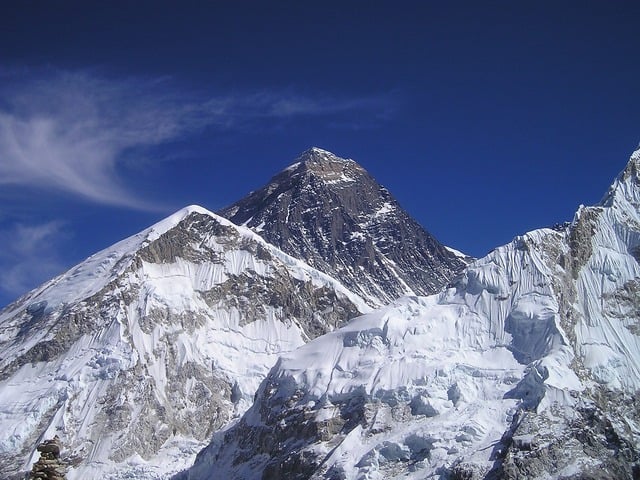 Fact 1: Tenzing Norgay and Sir Edmund Hillary were the first men to climb Mount Everest. They reached the peak on the 19th day of May 1953.

Fact 4: The official height of Mount Everest may have changed following the 2015 earthquake. Thus, plans to redetermine the actual height of this mountain is underway.

Fact 6: Andrew Waugh, a British surveyor tried to name this mountain all to no avail. However, he decided to eventually give it the name of the Surveyor General, whose name was George Everest.

Fact 7: The Surveyor General – George Everest modestly declined the name offered the Mountain by Andrew Waugh, however, the British Government changed the name from ‘Peak XV’ to ‘Mount Everest’ in 1865.

Fact 8: If the Mount Everest were a bit taller, its peak could have touched planes. This is due to the fact that most passenger jets fly at an altitude of 31,000 feet.

Fact 10: Expeditions to Mount Everest have always recorded the death of at least one man per year from 1969. The only exception to this occurrence was recorded in 1977.

Fact 11: The wind on Mount Everest blows at a speed of about 200 miles per hour, approximately 321.869 Kilometers per hour.

Fact 12: On average, 1 person out of 10 climbers reach the peak of Mount Everest, however many deaths have been recorded at that altitude.

Fact 13: Garbage and various corpses litter Mount Everest from time to time. It is reported that corpses serve as guides to climbers on which route and waypoints or path to follow during ascent to the Mountain’s peak.

Fact 14: Reinhold Messner was the first man to climb Mount Everest alone without any oxygen tanks or support. This feat was achieved in 1980.

Fact 15: About 50 tons of garbage is reported to be present on Mount Everest. This includes Empty oxygen cylinders, human waste, and climbing equipment. Painfully, garbage keeps increasing every year.

Fact 16: In 2008, an expedition to Mountain Everest, tagged ‘The Eco Everest expedition’ has tried to solve the issue by collecting the garbage. So far, about 13 tons of garbage has been collected by this team!

Fact 17: Yuichiro Miura (80 years old), a citizen of Japan is the oldest man who has ever climbed Mount Everest

Fact 18: As part of its effort to solve the problem of growing garbage on Mount Everest, the Nepalese government in 2014 made a new rule which stipulated that all climbers must bring down around 8kg of waste. Failure to comply with this rule means the erring climber would not be able to get retrieve his / her deposit of $4,000.

Fact 19: A team of artists named ‘Everest 8848 Art Project’ functioned in spreading the awareness about garbage disposal on Mount Everest. The artists were able to convert about 8 tons of waste into 75 art bits.

Fact 20: Stefan Gatt of Austria and Macro Siffredi of France are the first people to snowboard on Mount Everest. This feat was achieved by the duo in 2001.

Fact 21: The tallest man-made structure – Burj Khalifa stands at a height of 829 meters! However, Mount Everest is ten times taller than Burj Khalifa.

Fact 22: Before the second tallest building in the world – Taipei 101 in Taiwan- would match the length of Mount Everest, it’s height must be increased 17 times.

Fact 23: Due to tectonic plate movements, Mount Everest is projected to grow 4 mm taller every year.

Fact 25: Due to the high attraction of several expedition teams and individuals to Mount Everest, queues had to be followed by climbers. However, after several hours of waiting on the queue, most climbers get exhausted and may get killed at some points on the Mountain known as ‘death zones’

Fact 26: The Nepalese Government in a bid to stem the tide of events in ‘death zones’ are providing more fixed ropes near such ‘death zones’. In fact, the Government has plans to fit permanent ladders in these areas.

Fact 28: Phurba Tashi and Apa Sherpa jointly climb the Mount Everest 21 times! According to Apa Sherpa, the consequences of global warming is very clear on Mount Everest and quite worrisome for his community, which completely depends on mountains.

Fact 30: In 1924, George Mallory and Andrew Irvine who were on an expedition to Mount Everest completed the first ascent of the mountain. However, on the 8th day of June 1924, these explorers were last spotted just below the summit of Mount Everest after which they simply disappeared. The event cast a huge mystery on mountaineering for ages.

Fact 31: Despite the various hazards and danger inherent in ascending Mount Everest, Kami Rita Sherpa has gotten to the summit on 22 different occasions. Thus, he holds the record for being the most successful attempt on Mount Everest, while Dave Hahn (American) has made 15 successful trips to the summits as well.

Fact 32: The greatest cause of death for climbers scaling Mount Everest are avalanches (The avalanches are at about 2:1 falls)

Fact 33: Mount Everest is speculated to have come into existence about 60 million years ago.