After the Pacific Ocean, the Atlantic Ocean is the largest ocean on Earth. The Atlantic is divided by the Equator in two rather artificial sections: the North Atlantic and the South Atlantic. Its name derives from Atlantikos (Atlas – the sea beyond the Atlas Mountains), one of the Titans of Greek mythology. 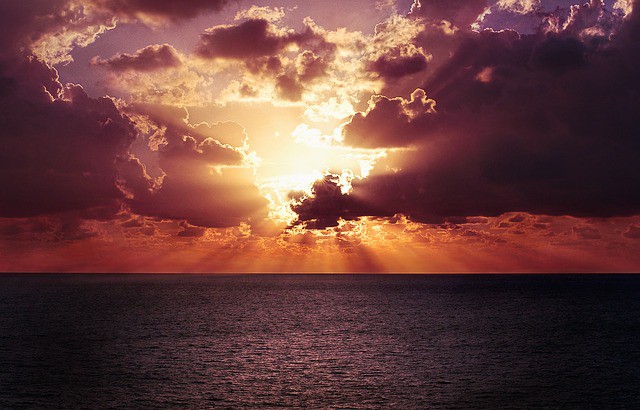 The Atlantic Ocean is essentially a basin or a large bucket stretching from north to south. From the Arctic Ocean, north to Antarctica in the south, in the space between the east coast of North America and South America and the western coasts of Europe and Africa. It occupies more than 106 million km² of total area.

The boundary between the Arctic Ocean and the North Atlantic has been set arbitrarily, through submarine ridges between the land masses of Greenland, Baffin Island, and Scotland.

However, it is clearer to mark the boundary with the Mediterranean Sea up to the Strait of Gibraltar and with the Caribbean Sea along the arc formed by the islands of the Caribbean.

The South Atlantic is arbitrarily separated from the Indian Ocean by the meridian of longitude 20° and the Pacific by the line further extending between Cape Horn and the Antarctic Peninsula.

The Atlantic Ocean began its formation around 150 million years ago, during the Jurassic time, after the separation of Africa and South America. It is an interesting fact that this separation is still progressing few centimeters a year, which isn’t noticeable to us. With approximately 1,500 km of width, this chain is more rugged than any other mountain range of the Earth’s surface. Its volcanic eruptions and earthquakes are frequent in the topography. Their elevations range between 1,000 and 3,000 m above the ocean floor.

On American, Antarctic, African and European coasts detritus of rocks eroded continents to accumulate, forming the continental shelf. Chains and seamounts were unevenly spread from east to west between the continental shelves and the Mid-Atlantic Ridge (Middle Atlantic Ridge), dividing the eastern and western ocean floor in a series of basins known as abyssal plains.

The basins on the American side of the Middle Atlantic Ridge have a depth of more than 5,000 m and are the North American Basin, the basin of the Guianas, the Brazil, and Argentina. The Euro-African profile is marked by several basins shallowest: the basin of Western Europe, the basin of the Canaries, the terrace Cape Verde Basin Sierra Leone, Guinea, of Angola, Cape, and Cape Needles. The large Atlantic-Indica western basin extends along the southernmost area of ​​the mid-Atlantic ridge.

The Atlantic Ocean has an average depth of 3,926 m. At its deepest point, the Puerto Rico Trench, the seabed is 8,742 meters deep.

The largest islands in the Atlantic Ocean are extended continental shelves. There are many islands located in this ocean, divided to several large groups:

The system of surface circulation of the Atlantic can be represented as two large vortexes or circular current systems: one in the North Atlantic and one in the South Atlantic. These currents are caused by the action of trade winds and by the rotation of the Earth.

Each vortex extends from a latitude of about 45° to Equator; the closer you are to the poles are less defined counter-rotating vortices; ie contrary to circulate clockwise in the Arctic regions of the North Atlantic, and in the sense of clockwise near Antarctica in the South Atlantic.

The Atlantic receives the waters of many of the most important rivers in the world, such as:

However, the Atlantic is more saline than the Pacific or Indian ocean because of the high concentration of salt water pouring Mediterranean.

The Atlantic Ocean may be described as a bed of water with temperatures below 9°C (layer of cold water) supporting a water bubble over 9°C (layer of warm water), which extends from 50° latitude N 50°S latitude and has an average depth of about 600 m. The most pronounced circulation is localized in the outermost layer of warm water. Below this, circulation becomes progressively slower with decreasing temperature.

Surface temperatures range from 0°C (found in the Arctic and Antarctic margins values) and 27°C (along the Equator belt).

At depths below 2,000 m remain unchanged temperatures around 2°C, while in the waters of the ocean floor, over 4,000 m, it is normal to find -1°C temperature.

The Atlantic Ocean has some of the most productive fishing grounds in the world, located on the continental shelves and marine ridges at the height of the British Isles, Iceland, Canada (especially the fishing grounds of Newfoundland) and northeastern United States. Outcrop areas, where the deep waters rich with nutrient flow to the surface, enjoy abundant marine wildlife, such as Walvis Bay in southeast Africa.

Some of the most important commercial species:

Tuna is also fished in large quantities northwest Africa and northeastern South America. Fishing per unit area is much more abundant in the Atlantic than in other oceans.

The Sargasso Sea is an outstanding example of marine flora; it is located in a North Atlantic oval section extending from the Caribbean to the Azores south and is bounded on the west and north by the Gulf Stream (approximately up to the coast of Newfoundland in the north). On its surface, it is relatively easy to find thickets of brown algae called kelp.

The Atlantic Ocean is also rich in mineral resources. The eastern coastal area of ​​Florida operates mines titanium, zircon, and monazite (phosphates derived from cerium metals), while in the equatorial coast of Africa abounds titanium and iron ore. The continental shelves and slopes of the Atlantic are potentially rich in fossil fuels. In the North Sea region and in the Gulf of Mexico have been extracted large amounts of oil; however, on the African coast and in the Gulf of Guinea these extractions are performed to a lesser extent.