What is Ethanol Fuel?

Overdependence on fossils fuels has led to a hail of environmental problems the universe faces today such as climate change, oil spills, air pollution and acid rains. Burning of fossils fuels to generate electricity releases dangerous greenhouse gasses like carbon dioxide, nitrous oxide, water vapor, methane and fluorinated gasses that cause the greenhouse effect. For this reason, most governments are focusing on green and renewable sources of energy to arrest this situation. Ethanol energy is one such green and renewable energy alternative.

Ethanol energy is a type of biofuel derived from corn and other plant materials. It’s a renewable source of energy because, unlike the limited fossil fuel reserves, the plant materials used to produce it can be grown through time and the byproducts of its combustion, for example, carbon dioxide and water are utilized during the process of photosynthesis. It is also green because it doesn’t release dangerous greenhouse gasses to the environment. Nonetheless, you should know that fossil fuels are used in the production of ethanol to burn the mash during distillation. 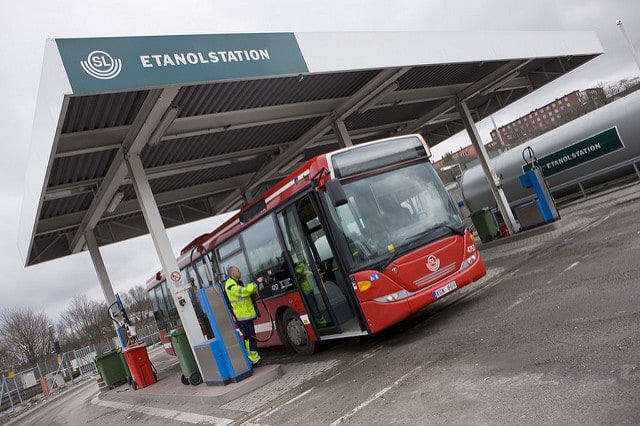 How is Ethanol Made?

Ethanol can come from things that grow or cellulose materials, for example, starchy crops (corn, sorghum, and barley), sweet crops (sugarcane, citrus, and sugar beets) and plant materials (switchgrass and wood pulp). Ethanol is produced by fermentation and distillation. It begins with crushing the plant materials into tiny particles and grinding the starch into fine powder. Water is then added to the finely ground powder to obtain a mash.

A special enzyme called alpha amylase is incorporated in the mash to break down the starch into minute particles. The mixture is then subjected to heat, and when boiling point is reached, the heat is reduced for the mixture to simmer. The heat is increased again to break down more starch. The mixture is then taken off the heat to cool a little bit.  A second enzyme known as glucoamylase, which helps to convert liquid starch to sugar, is incorporated.

At this time, you must have equipment to harness the vapor. Place the mixture on a source of heat and crank up the heat. The ethanol will start to vaporize.  Harness the vapor in a separate container. Cool and condense the vaporized ethanol to liquid form. Purify the ethanol by eradicating any water left to obtain pure ethanol.

The pure ethanol is finally denatured to obtain energy fuel. To denature the pure ethanol, add a tiny amount of gasoline between 2 to 5%. Denaturing is needed for all pure grade ethanol. The leftover mash is never wasted. It is a very nutritious animal feed. The ethanol fuel produced is disseminated to the market, particularly, to fuel stations and private distributors.

Ethanol is a renewable energy resource

Ethanol is classified as a solvent. A solvent is a substance that can wash away dirt, which means it can clean your car engine making it last longer. It will also save you money. Regular engine maintenance can significantly drain your capital reserves.

Adds green jobs to the economy

Embracing ethanol fuel has the potential to add jobs to any country’s economy. For example, statistics project that ethanol fuel would cut U.S. trade deficit by approximately $34.1 billion in the next few years. Beefing up ethanol use is projected to create a little over 50, 000 green jobs.

Widely available and easy to use

Over the recent years, an influx of flexible fuel vehicles that are able to utilize E85 has been witnessed. Auto manufacturers have gotten to grips with the demand for ethanol fuel and responded in kind by manufacturing these kinds of vehicles. The flexibility of these vehicles has given car owners the flexibility to choose between E85 and gasoline, or a combination of both. This has driven up the production of ethanol fuel, and right now, if you drive to any fuel station, you won’t miss ethanol fuel.

Since ethanol is produced domestically, and from domestically grown plant materials, it minimizes a country’s overreliance on fossils fuels like oil and natural gas.

The ethanol produced can also be used to produce alcoholic beverages. For example, spirits like gin, vodka, and whiskey are obtained by distilling a mash of grain such as corn, rye, barley, and wheat. Rums are distilled from sugarcane juice. This alternative brings immense benefits to the distiller.

Requires a lot of farmland

Producing plant-based ethanol requires acres of land to be able to fulfill growing demand. It can be quite challenging if you don’t have that kind of land. Renting land can be an option, but renting acres of land can only add up to the cost of ethanol production.

Although ethanol is a renewable and green energy resource, the distillation process uses heat from fossils fuels. We all know that fossil fuels contribute mightily to greenhouse gas emissions. Also, production of ethanol may take more fuel, which can affect the pricing of the ethanol fuel.

With fossils fuels, we only need to drill initially, and that’s it. Drilling is not that costly. To obtain the final ethanol energy, you have to go through a lot of processes including growing (which could take months), fermenting, distilling and transportation. The entire process could prove costly, which would eventually drive up the cost of ethanol fuel. Growing these crops also needs a lot of water, especially, in countries that do not receive sufficient rainfall. This will also add up to the cost of ethanol fuel.

Hard to scale up ethanol blends