What is Nuclear Energy?

The onset of the industrial revolution has demanded an increase of energy yearly. Originally, the source of energy is through the combustion of fossil fuels. However, its effect on the environment has also been increasingly questioned. Then, new energy sources are created which are renewable and safe such as hydroelectric, solar, and wind energy. Though, considered as a valuable replacement, such are insufficient to provide the energy demand of the industry.

Nuclear energy is an energy produced by the fission and fusion of larger atom such as the uranium to create an electricity. The nuclear fission involves the splitting of the atom by a neutron into two finer atoms producing a larger amount of energy while the nuclear fusion is the process wherein two atoms merge or fuse together to form and create a more powerful atom. Nuclear energy has gained popularity because of its clean, cheap cost, and sustainability. In the United States, 20% of the electricity comes from the nuclear energy. Moreover, nuclear energy is effective at supplying energy for submarines, cancer treatments, and growing agricultural productions. 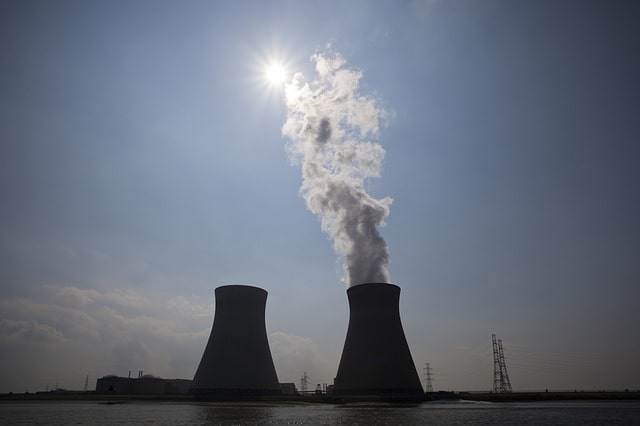 The potential of the nuclear fission to create energy was discovered by an Italian Physicist, Enrico Fermi in 1934 when he blasted uranium atoms and found out that the products were much finer. He made the original nuclear reaction on December 2, 1942 and figure out its power and efficiency to use. In July 1945, the first test on nuclear reaction was held in the desert of New Mexico through a nuclear bomb. Nuclear energy is generated through a nuclear power plant which makes a very complex system in order to maintain the proper and safety process. Nuclear power plant contains a control structure that holds the reactor and a deep concrete pool for the storage of the nuclear fuel when unused. It is run by a steam created by the fission of atoms that turns the turbine and in turn, the turbine turns on the generator where it creates the magnetic field that generates electricity.

Unlike the fossil fuels, the nuclear energy does not produce harmful gasses such as carbon dioxide, sulfur dioxide, nitrogen dioxide and etc. The nuclear fuel which considered its waste is way far less than that of fossil fuel wastes. Moreover, this nuclear fuel or spent fuel is cooled and stored in deep storage sites which can be recycled to produce fissile materials. These fissile materials are used to lessen the amount of spent fuel for disposal. However, countries such as Japan, Russia, and China have into a plan to reused the nuclear fuel for future use of power plants rather than disposed.

The deep pool of nuclear waste in a nuclear power plant is filled with water in order to avoid the escape of the radioactive nuclear waste, thus, radiation does not reach the biosphere. Up to date, two serious accidents have only been recorded with the use of nuclear power plants: Three Mile Island (Pennsylvania) in 1979 and the Chernobyl (Ukraine) in 1986. Yet the release of the radioactivity was confined within the containment structure which is a lead and steel structure enclosing the nuclear reactor. The minimal amount of escaped gas was harmless and no serious catastrophe was noted.

Nuclear energy is the most reliable source of energy that sustains an average base-load power of 85-90 percent and can be at the maximum of 92-95 percent. Owing to the energy- nature of Uranium, a small pellet already contains the energy of 17,000 cubic feet of natural gas. Thus, it able to provide heat for more than five years for the making of the steam even from a single pellet. Nuclear energy also extends the life of reactors up to 20 years.

Uranium is a common metal found to be abundant in the earth’s crust and even more abundant than tin. In Canada and Australia, many uranium deposits were found. Its quantity of supply is believed to increase by a minimum of a quarter in the last decade due to the increased mineral exploration. Moreover, the depletion of uranium could not be possible as there will be many future deposits expected in the seawater, a potential source of uranium.

Unlike the large areas required for solar, wind, and biomass energy, the building of a nuclear power plant requires an area that as only big as the stadium. Because of the compact structures and designs of power plants, less area is only required for the procedure.

Nuclear energy offers a competitive cost in the market. Unlike the fossil fuel that fluctuates its price because of its dependency on foreign supplies, the cost of nuclear energy is stable. Nuclear energy, therefore, provides a reliable amount of energy yet affordable.

The spent fuel in a nuclear power plant is very dangerous to human and environment. Until now the issue in the disposal of the spent fuel remains unresolved. The high-level waste needs the construction of larger geological storage sites which some countries such as the United States finds a delay for the approval.

Eventhough nuclear power plant is secured in a high standard, it is not 100 percent and there is always a possibility, even small that accidents will happen. If more power plants are constructed, the more of the probability that accident happen. Moreover, even a single accident can only happen, it will create a very devastating effect on the human lives and in the environment.

Nuclear proliferation threatens the international security today. This occurrence thus creates civil attacks on the sources of uranium, plutonium, and other fissile materials. The design of the nuclear power plant can, however, be used to make nuclear weapons through its waste that is used for nuclear fission.

Though the nuclear energy contributes less in the accumulation of greenhouse gasses, its catastrophic effect because of its spent fuel produces radiation to people and environment that lasts for a long duration of time or even lasting. On plants, radiation causes chromosomal aberrations, DNA damage, growth reduction, reproduction and developmental abnormalities, mortality, and direct burn damage. On the other hand, on animals and humans, radiation could kill cells and mutate the DNA. The Chernobyl accident in 1986 affect the animals by the immediate death of the rodents. On humans, radiation causes radiation sickness and cancer that is commonly a thyroid cancer.