What is the Food Chain?

A food chain is a sequence of transfer of matter and energy through food, from one organism to another. Due to the fact that most consumers in a food chain feed on more than one type of plant or animal, an intertwined network of the food chain is often found in most ecosystems. This complex of food chains is referred to as ‘food web‘. 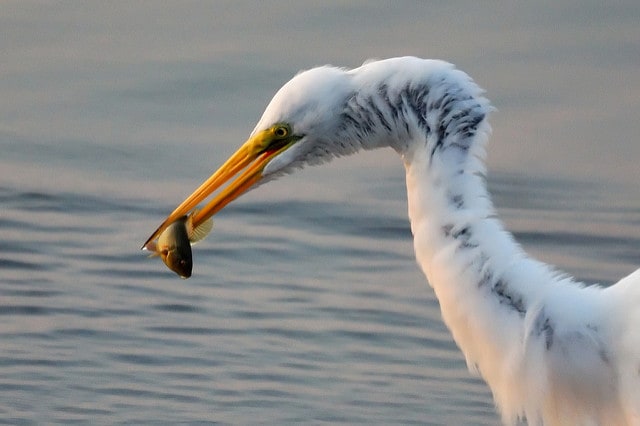 There are two main types of food chains, they are:

This type of food chain is exhibited when living green plants are fed on by grazing herbivores, which are, in turn, fed on by carnivores. Ecosystems with this type of food chain are highly dependent on an influx of solar radiation. This is because, in predator food chains, the energy source is the sun and the green plants, due to their possession of chlorophyll (a pigment contained in the leaves and stems of green plants) use solar energy to make food for the ecosystem in a process referred to as ‘Photosynthesis’.

Photosynthesis is the process by which carbohydrates or sugars are manufactured in the parts of the plant containing chlorophyll by a combination of carbon dioxide and water in the presence of radiant energy from the sun. Oxygen is given off as a by-product of this process.

This type of chain thus depends on autotrophic energy capture and the transfer of this captured energy to herbivores. Most of the ecosystems in nature exhibit this type of food chain. Examples of food chains in this category include:

In this example of a predator food chain, the phytoplankton is primarily responsible for the production of food (or organic matter) through photosynthesis. The phytoplankton is consumed by acellular and multicellular organisms such as zooplankton. The zooplanktons are in turn fed on by lobsters, crabs or small fishes. The small fish, lobster or crab is in turn fed on by a larger fish. The larger fish, in turn, is fed on by mammals, various reptiles or birds, whose death and subsequent decomposition by micro-organisms terminates the food chain

In this case, the grasses are the primary producers in this food chain. They are able to produce food through the process of photosynthesis, using the chlorophyll in their leaves and stems in the presence of sunlight.

The energy is transferred through food from the grasses to the rabbits when the grasses are eaten by the rabbits. The Fox, a carnivore and a heterotroph, being unable to produce its food by itself, relies on obtaining energy by feeding on the rabbit.

This type of food chain starts from dead organic matter, which is fed on by microorganisms to organisms feeding on detritus and their predators. Such ecosystems are, therefore, less dependent on direct solar energy. These depend chiefly on the influx of organic matter produced in another system.

For example, such type of food chain operates in the decomposing accumulated litter in a temperate forest. It is also referred to as ‘decomposer food chain’. Bacteria and fungi feed on the feces of animals, the cellulose of fallen trees, dead bodies of animals, etc.

Therefore, the end product of detritus food chains includes carbon dioxide and inorganic compounds such as nitrates, sulphates, phosphates. At the end of the detritus cycle, no combustible organic matter is usually left.

A typical example of this type of food chain is illustrated below:

Therefore, the total energy obtained by final consumers is usually much lesser than the amount of energy obtained from the primary producer or detritus in a food chain. The main ways by which energy is lost as one move from a higher trophic level to a lower one includes:

1)  The study of food chain improves our understanding of the problems of bio-magnifications (That is, the increasing concentration of a toxic substance in tissues of tolerant organisms, which build up at successively higher levels in a food chain).

2) The studies of food chain help us to understand the feeding relationships and the interactions between organisms in an ecosystem.

4) It improves our knowledge about the movement of toxic substances in an ecosystem.

In conclusion, a food chain, usually a theoretical representation of how energy is transferred from one level in an ecosystem to another, may, at best, be described as dynamic. This is because some alterations to the theoretical representations of the flow of energy may occur. This may be exhibited as a skip of one or more trophic levels by the final consumers in obtaining energy from the primary producers, thereby shortening the proposed food chain.

A shortened food chain is advantageous in the sense that, the energy transferred to the final consumer is usually higher than what would have been obtained by the final consumer if the chain was longer.  This conservation of energy, peculiar to shorter food chains can be associated with a lower loss of energy through respiration or loss of energy as heat, as mentioned earlier.