Temperate grasslands were one of the greatest biomes in the natural fauna. However, human activities over the centuries altered its composition and today; it has become one of the most endangered of all the biomes in the world. Human activities like agriculture have also destroyed and reduced the biome to such a degree that it doesn’t look appealing anymore and it has a lower biodiversity than the forests. However, with governments spearheading campaigns to conserve the environment, humans are increasingly exercising prudence, and this is good for the future of our temperate grassland biomes. 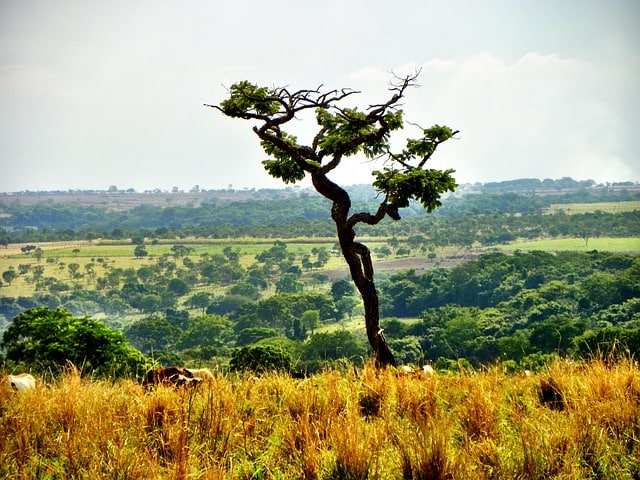 Temperate grassland biome is characterized by fairly low rainfall (20-35 inches) throughout the year. The most rainfall occurs in late spring and early summer where convectional precipitation takes place. The greater part of this precipitation comes in the form of snow, especially in the temperate grasslands of the northern hemisphere.

Temperate grassland biomes are characterized by dark, fertile loam soil. The constant decay of the abundant grass contributes to the nutritive value of the soil. This nutrient-dense soil helps the mushrooming plants to grow fast and flourish. The nutrient-dense soil is the major reason most grasslands are used for farmlands, more so in the U.S., where the grasslands have significantly reduced due to farming activities. Temperate grasslands are also characterized by fires, which ensure the grassland maintain short vegetation. Wildfire is another reason there is shortage of trees and shrubs in this biome.

As stated earlier, the dominant vegetation in temperate grassland biome is grass. Examples of grasses found here include:

Blue-eyed grass is, essentially, a wildflower and falls under the Iris family. It’s mainly found in North America and forms clumps of very long foliage, which flourish during spring, with small flowers mushrooming. This grass flourishes in a wide range of soils and is known to be a magnet for bees throughout the year. The stems of the blue-eyed grass can grow as long as 60 centimeters. It thrives where there is sufficient moisture and remarkable drainage. Nevertheless, the blue-eyed grass is able to endure the dryness of summer. It has thick roots and can endure temperatures of as low as -7 degrees Celsius. This means that it’s able to survive throughout the year, hence the name perennial grass.

Purple needlegrass is sometimes called purple stipa. It originates in California. Purple needlegrass is also a perennial grass that produces tufts of erect and unbranched stems that extend up to a meter tall. It develops extensive root system that is able to grow up to 20 feet deep into the soil, which is why it can endure lengthy drought. It has a characteristic open, nodding flower cluster that can extend up to 60 centimeters in length and consists of numerous branches consisting of spikelets. The grass produces copious seeds of approximately 227 pounds per acre.

Buffalo grass is a North American prairie grass that originates in Canada, Mexico, and the U.S. It produces the most uniform and attractive turf among the temperate grassland biome grasses. It’s uniquely tolerant to prolonged droughts and freezing temperatures. It’s low growing (8 to 10 inches high). Buffalo grass spreads by seeds, stolons or surface runners and develops into a fine textured, thin turf and a unique soft blue-green color. It lacks underground stems or rhizomes. Cultivation has majorly contributed to Buffalo grass’s destruction throughout the world.

It’s is a beautiful turf grass, which is why it’s deservedly used on golf courses and home lawns. Rye grass is characterized by a bunch-like growth habit. It’s native to Europe, North Africa, Asia, Australia, America, as well as various oceanic islands. It has a characteristic shine at first glance, which makes its surface reflect more light than other grasses. The name rye grass stems from its reddish colored seed heads.

Foxtail grasses are named so because of their spikeless clusters of bristled seeds that mimic the bushy fox tail. Some foxtail grass species have pointed tips and backward pointing barbs, which can get lodged in dogs and other animals’ ears and nostrils.

Other plants other than grass you can find growing in temperate grassland biome include:

The major animal species found in temperate grassland biomes are large grass-eating, hoofed mammals that leverage the wide range of grasses and those that have special digestive systems to break down the grasses. These mammals are able to see predators lurking due to the characteristic short grass of the biome, and this allows most to outpace the predators.

The Russian steppes harbor animal species such as wild horse, polecats, saiga antelopes, mole rats and much more. Mole rats typically live underground in burrows, thanks to their long limbs, tiny external ears, small eyes, including large scissors, which they use to dig holes for safety.

Most prairie animals have coats that mimic surrounding vegetation to camouflage from predators. Some predators like the snow leopards develop a creamy white coat, which helps them to camouflage and catch prey with ease.

Animals like Aardvarks feed exclusively on insects by leveraging their large claws to dig termite mounts and ant hills. Their long, sticky tongues help them to lap up the insects.

Omnivores (animals that eat plants and animals) such as badgers also thrive in this biome. These kinds of animals eat rodents, snakes, frogs, insects, fruits, and roots.