Every animal and plant on the face of the earth relies on other living organisms to get by. The way these living organisms interact with the air, water, sun and amongst themselves is referred to as an ecosystem. Within the ecosystem, the living organisms work hand-in-hand to establish an equilibrium that enables all of its constituents to flourish. This brings us to a biome, which refers to a large group of similar ecosystems. All the areas in a biome consist of related animals, plants, and weather. Planet earth consists of a glittering array of biomes both in water and on land. Biomes existing on land are called terrestrial biomes, while those existing in water are called aquatic biomes. Deciduous biomes, which make our topic of the day fall under terrestrial biome.

At first glance, the word deciduous can be a little bit confusing. Deciduous simply means falling off at a particular season. So, deciduous forest is a kind of biome where leaves fall off the trees when winter knocks. 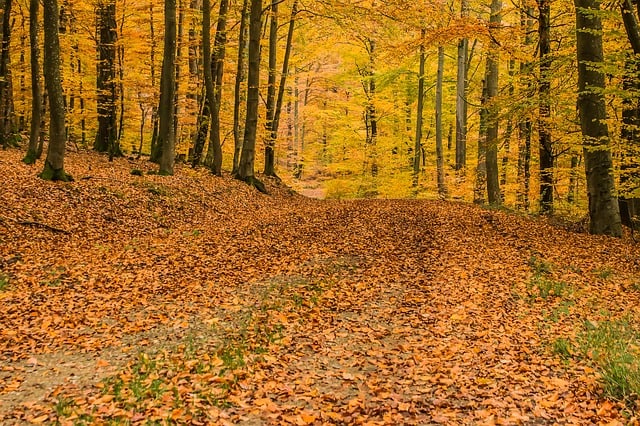 Deciduous forest biome experiences an average temperature of approximately 50 degrees Fahrenheit or 10 degrees Celsius. Summer times are mild, with an average temperature of approximately 70°F (21°C). Winters temperatures, on the other hand, are always below freezing point. Plants and trees have developed unique adaptations to flourish in deciduous biomes. Temperatures in this biome don’t drop a lot from day to night. This because the deciduous forest is 60% to 80% considerably humid, and this assists in equalizing changes in temperature. The presence of a moist blanket of air helps shield the forest, which assists in maintaining heat at night. During the day, this moist blanket prevents the biome from warming up fast.

Deciduous forest climate features four different seasons; winter, summer, spring and autumn. During winter, all trees drop off their leaves. During summer, trees provide shade, which means the weather is not relatively hot. A lot of leaves and grass blossom on trees during spring to replace those that fell during winter.

Autumn brings out the best of deciduous forest biome due to the elegant colors of tree leaves that transform from green to yellow, red, and orange.

Deciduous forest biomes are found in numerous places. They are located in the eastern sections of North America and the middle parts of Europe and New Zealand. However, they are predominantly located in Asia, for instance, China, Russia, Japan, Korea and so on. Some are also sprinkled in the southern end of South America. Deciduous forests are found in the following states in the U.S: Florida, Georgia, South Carolina, Alabama, Virginia, parts of Texas and Tennessee. Among the countries in Europe that have Deciduous forest biome include Italy, Spain, France, Bulgaria, Poland and much more.

The average annual precipitation in a deciduous forest biome is 30-60 inches (75-150 cm) each year. Because most of the rain falls during summer, precipitation can go up to 40cm (approximately 16 inches). It could even exceed that. It doesn’t quite rain during winter like summer.

This layer includes saplings and tree species that are naturally shorter.

This layer include shrubs.

The fourth layer is composed of forest herbs like berries and wildflowers. In the course of spring, before the trees in this biome drop off their leaves, these herbs blossom and grow fast to leverage the sunlight.

This would encompass lichens and mosses that blossom on trunks of trees.

Deciduous trees are well- adapted to survive in different climatic seasons in the biome. During spring, they start to grow thin, broad and light leaves. This kind of leaf structure can effortlessly arrest the required amount of sunlight for photosynthesis (food production). The broad leaves are ideal when temperatures become warm, and sunlight is abundant. Nevertheless, when temperatures become cold, the broad leaves are disadvantageous since they provide a large surface area that encourages loss of water and damage to tissue. To mitigate this problem, deciduous trees develop physical and internal adaptations sparked by variations in the climate.

Limited sunlight and cooler temperature are the conditions that trigger deciduous trees to develop adaptation. In autumn, when these climatic conditions take place, the trees disconnect the supply of water to leaves and close off the area occurring between the tree trunk and the leaf stem. With insufficient supply of water and sunlight, the leaf becomes incapable of generating chlorophyll (the green pigment found in leaves).

As the level of chlorophyll goes down, the leaves change their color. The scintillating display of bright red, gold and yellow leaves associated with deciduous forests in the autumn is due to this process. Most of the trees in this biome drop off their leaves the moment they become brown and dry.

Deciduous rainforest biome is a home to a variety of reptiles, mammals, birds, and insects. Examples of mammals living in deciduous rainforest biome include raccoons, skunks, bears, squirrels, and wood mice. In the United States, you can find deer in this biome. Although coyotes, bobcats, Timberwolves and mountain lions naturally exist here, humans have almost eliminated all of them due to their threat to human life.

Other animal species that naturally lived in deciduous rainforest biome, for example, bison and elk, have been hunted down that they’re nearly extinct. Reptiles, amphibians, and insects also thrive here. The wet climate and considerably warm temperatures of the deciduous forest make it an awesome habitat for numerous amphibian and reptile species that cannot survive in colder climatic conditions. Salamanders, Wood Frogs, and Toads mainly live on the forest floor.

Most adopt camouflage tendencies to look like dead, decomposing leaves that cover the ground. Reptiles like rat snakes and box turtles also exist here. Different insect species also live in this biome. Tree leaves are rich sources of food for butterfly and moths. The tree woods are home to carpenter bees and termites. Walking sticks and katydids synchronize with the greenery and cicadas spend the greater part of their lives holed underground with roots of plants being their main source of food.

Animals living in this kind of biome have developed two types of adaptation: hibernation and migration. Hibernation is a state of inactivity. Migration is the movement of animals from freezing climatic conditions to more favorable climatic conditions. While huge arrays of birds migrate, most mammals hibernate in winter when food is inadequate.

Another unique adaptation many animals have developed is food storage. Animals like squirrels, jays, and chipmunk collect seeds and nuts that are bountiful in supply in the summer and store them in tree hollows for consumption in winter. The cold temperature helps preserve the seeds and nuts, so there is no chance for decomposition.