Across the globe, there is a wide range of plants, animals, and environment that make up biome. A biome is a large ecological area on the face of the earth consisting of plants and animals that have adapted to the environment. Biomes are typically defined by physical rather than biological factors, for example, relief, climate, vegetation, geology, and soils. Many kinds of biomes exist on planet earth including Aquatic biomes (freshwater, marine, estuaries, corals, freshwater wetlands) and terrestrial biomes (rainforest, tundra, savanna, alpine, desert, chaparral, temperate forest, deciduous, coniferous). Of all the terrestrial biomes, coniferous biome is the largest in the world.

Coniferous forest is a kind of biome situated in temperate regions of the globe that experience warm summers and cools winters, plus sufficient rainfall to enable the forest to thrive. A coniferous forest biome is chiefly made up of cone-bearing or coniferous trees, for example, pines, fir, hemlocks, spruces, cedars, cypresses, redwoods, yews, Douglass firs, larches, and kauris. Coniferous trees are characterized by either small and needle-like or scale-like leaves, and majority remains green throughout the year. These coniferous tree types are softwoods, which means they have the ability to get by in cold temperatures and acidic soils. 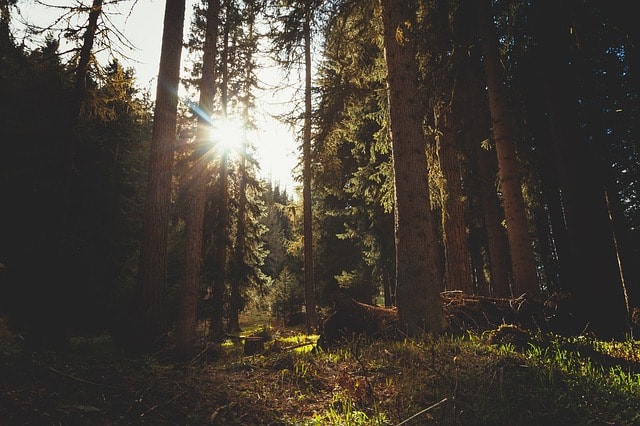 Coniferous forests thrive in tropical and subtropical climates (areas with tropical latitudes). This makes the area climate more humid. During winter months, precipitation falls as snow, while in the summer, it falls as rain. Coniferous rainforest biomes stretch from Siberia to Canada and experience freezing winters. Summer temperatures range from mild to excessively hot.

One kind of coniferous forest called the northern coniferous forest is located in 50° to 60°N latitudes. Another kind known as temperate coniferous forest thrives in lower altitudes of Asia, Europe, and North America in the high areas of mountains. Other subdivisions of coniferous rainforest are located at different elevations, specifically, in Central America, in the rocky mountains of and in eastern Asia. They are referred to as montane and subalpine forests and are conquered by a mix of spruce, pine, and fir.

The name ‘’evergreen” defines a critical adaptation of conifer trees. Like Kermit, conifers are evergreen. Since they don’t shed their leaves during winter, they are not forced to grow them back during spring. This is a vital adaptation to a harsh environment because regrowing leaves require loads of energy. Another remarkable adaptation of conifer trees that enable them to survive the harsh coniferous rainforest biome winter is the needle they develop. While coniferous rainforest biome is characterized by moderately high precipitation, the harsh (frozen) winter makes it significantly harder for trees to tap water.

Possessing thin needles, along with a waxy coating massively reduces loss of water via transpiration. The needles are dark colored, which is also a plus for the conifers. Just like a dark shirt absorbs heat in a sunny day, the dark needles assist the trees to absorb vast quantities of the sun’s heat necessary for photosynthesis. Coniferous trees are also characterized by a pointed shape. And this is for a good reason. The pointed shape prevents accumulation of snow, which could damage coniferous tree branches. The pointed shape allows snow to slide off to the ground seamlessly.

Coniferous rainforest biome is a cold area, which makes it hard for animals to survive. Most animals develop thick coats of fur when winter strikes to insulate themselves from freezing temperatures. Some hibernate. Those that are not able to develop adaptation migrate to warmer areas. The animal population in coniferous rainforest biomes is seed-eating jays and squirrels, plus huge animals that feed on twigs, leaves or high-growing vegetation like snowshoe hare, deer, elk, and moose. The ponds and bogs in the coniferous rainforest biome offer a vital summertime breeding ground for a variety of insects.

Migratory birds flock this biome to feed on the bountiful supply of insects. Natural predators live here including wolves, grizzly bears, wolverines, and lynxes. These predators are ferocious and agile, which means their prey must have unique adaptations to survive here. Some preys have developed interesting adaptations such as changing of colors. This color-changing adaptation enables them to hide from predators by blending into diverse winter and summer habitats. For instance, the ermine takes up a dark brown color in the summer, but transforms to white during winter to accord it remarkable camouflage.

Do humans live in the coniferous rainforest biome? You might ask. A few big cities such as Toronto and Moscow are situated in the southern parts of the coniferous rainforest biome. However, a majority of it is highly unpopulated. Some native communities still live in this biome. Industrial activities take place in here including logging, hydropower production, and mining. These activities have, over the years, impacted this biome and areas around it and might continue to impact it moving forward.

Most of the logging occurs through clear-cutting, which is utilizing high powered equipment to get rid of most of the surrounding forest trees. Hydropower development may be viewed as beneficial since it harnesses the power of moving water to generate electricity. However, it has contributed immensely to the damage of many coniferous rainforest biomes by diverting stream habitats, water flow patterns and flooding wide areas, not to mention, interfering with the beautiful scenic landscapes.

Although mining brings handsome rewards, it can significantly pollute surrounding water and soils by contribution to acid rain. Growing back of trees takes years due the coniferous rainforest climate and soil. Also, many large vertebrates that exist in coniferous rainforests are repelled by human presence, pollution, and alteration of habitat. Humans can take steps to help conserve coniferous rainforest biomes by getting to know more about this biome and using paper prudently. They can also help by embracing recycling practices. This habit will significantly assist to reduce the need for logging, which contributes to the destruction of forest biomes.