Alpine biome describes an ecosystem that doesn’t contain trees due to its high altitude. These biomes are found in mountainous regions across the globe. Their elevation normally ranges between 10,000 feet (3,000 meters) and the area where a mountain’s snow line begins.

Alpine biomes are home to only about 200 plant species, as their dynamic conditions are not favorable for plant growth. These regions are characterized by cold and windy conditions, as well as harsh sunlight. Moreover, there’s a minimal supply of carbon dioxide for photosynthesis at high altitudes. 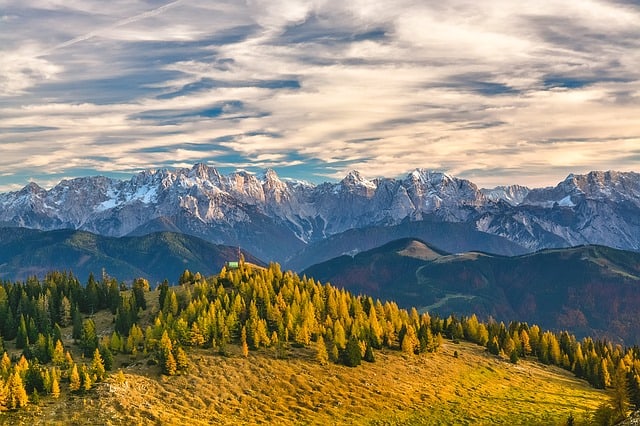 Let’s take a deeper look at alpine biome, including its climate, geographical location, as well as various flora and fauna you can find there.

The climate of alpine biomes is somewhat dynamic. You can’t describe the climate of this kind of biome using a simple climate scheme. Temperatures normally drop by about 10oC for every 1000 meters as you go up a mountain.

The biome experiences a long, cold winter season, lasting about nine months. Summer temperatures normally range from 40 to 60oF. However, these temperatures can normally drop from warm to freezing within a day.

Precipitation varies considerably in alpine biomes, but they’re usually fairly dry. In fact, the regions receive about one foot (30 cm) of precipitation annually. Nevertheless, snow may remain on the ground for an extended period of time, thanks to the consistently low temperatures.

Alpine biomes occur at high altitudes within any latitude worldwide. Parts of montane grassland and shrubland ecosystems across the globe include alpine biome. Extensive  areas of alpine biome are found in the following regions:

Alpine biome occupies summits and slopes of high mountains. It can also be found in high-mountain ridges above timberline. The treeline normally occurs at high altitude on warmer equator-facing slopes.

In light of the fact that alpine region is found only on mountains, the biome is characterized by a rugged and wrecked landscape, with rock-strewn, snowcapped peak, and cliffs. Other remarkable features include talus slopes.

It’s worth noting that some areas of this biome feature gently rolling to virtually flat terrain. Across various locations, the treeling rises about 75 meters as you move one degree south from 70oN to 50oN, and 130 meters a degree as you move from 50oN to 30oN. The treeline virtually remains constant between 30oN and 20oS, at 3,500 meters to 4,000 meters.

Plants Found in the Alpine Biome

As a result of the windy weather, alpine biomes are characterized by small groundcover plants. These plants take longer to grow and reproduce. They shield themselves from the cold and windy conditions by staying as close to the ground as possible.

Moreover, these plants decompose slowly after they die, thanks to the low temperatures. This results in poor soil conditions. Most plants that are found in alpine biomes are adapted to thrive in rocky and sandy soil.

You should also realize that plants in the alpine biome have an anti-freeze chemical, which coats and protects the plants from the low temperatures. This ensures the plants don’t die from freezing. They also have specialized root system.

The roots don’t grow vertically downward but rather spread and grow horizontally. This kind of root growth prevent the roots from getting to the permafrost soil, which would result in the death of the plants due to water loss.

These plants need all the water they can get in a bid to survive the cold, dry alpine conditions. Here are some of the plants that thrive in alpine biomes:

However, they are more prevalent in the Ancient Bristlecone Pine Forest in the California’s White Mountains. While bristlecone pine can live for over 4,000 years, it can only grow to up to 60 feet tall.

Animals Found in the Alpine Biome

Animals that live in the alpine biome should be adapted to contend with two types of problems:

This region is home to many warm-blooded animals and a couple of insect species. But how do these animals deal with the cold?

They normally hibernate, mover to warmer regions, or insulate their bodies with layers of fur and fat. Moreover, these animals normally have short legs, ears, and tails, which helps in minimizing heat loss. They also boast larger lungs and a higher number of blood cells.

The blood of alpine animals has the capability to work with lower oxygen levels that are typical of high elevations. Here are some of the animals you can find in alpine biome:

Chinchilla is one of the most interesting animals in the alpine biome. Chinchillas can be found in the Andes alpine regions. But that doesn’t mean they are easy to find.

They feed on roots, plants, and grasses. These animals were on the verge of becoming extinct in the 1940s as they were rampantly hunted for their soft, attractive fur, which was used to make coats. Following the threat of extinction, chinchillas were declared an endangered species and laws enacted to protect them from hunting.

Humans are destroying alpine ecosystems by creating ski slopes on hills that plants and animals call home. Airborne pollution, such as acid rain, is also a huge threat to alpine habitats. Acid rains have destroyed the productivity of many mountain lakes, which usually have a marginal buffering capacity. Nonetheless, global warming is arguably the biggest threat to alpine biomes.